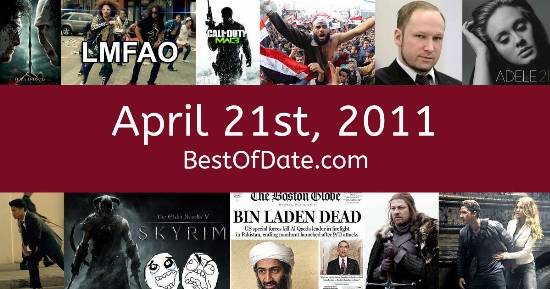 April 21st, 2011 relates to an event in a movie, book, game or television series:

Songs that were on top of the music singles charts in the USA and the United Kingdom on April 21st, 2011:

The date is April 21st, 2011 and it's a Thursday. Anyone born today will have the star sign Taurus. The summer of 2011 is drawing closer and temperatures have started to rise.

In America, the song E.T. by Katy Perry ft Kanye West is on top of the singles charts. Over in the UK, Party Rock Anthem by LMFAO is the number one hit song. Barack Obama is currently the President of the United States and the movie Hop is at the top of the Box Office.

It's 2011, so the music charts are being dominated by artists such as Adele, LMFAO, Katy Perry and Bruno Mars. The catchphrase "Every Day I'm Shufflin'" is being repeated and parodied following the success of LMAO's song "Party Rock Anthem". Anti-government protests are currently taking place in cities across Syria.

A civil war is raging on in Libya. Large battles are taking place between Colonel Gaddafi's government forces and Libyan rebels, who are being supported by NATO. A new fantasy TV series called "Game of Thrones" has just debuted on HBO. On TV, people are watching popular shows such as "Smallville", "House", "How I Met Your Mother" and "The Vampire Diaries".

Meanwhile, gamers are playing titles such as "Farmville", "Halo: Reach", "Assassin's Creed: Brotherhood" and "Portal 2". Children and teenagers are currently watching television shows such as "Peppa Pig", "Go, Diego, Go!", "Phineas and Ferb" and "The Suite Life on Deck". If you're a kid or a teenager, then you're probably playing with toys such as "Xbox 360", "PlayStation 3" and "iPad".

Who was the Prime Minister of the United Kingdom on April 21st, 2011?

Enter your date of birth below to find out how old you were on April 21st, 2011.

Looking for some nostalgia? Here are some Youtube videos relating to April 21st, 2011. Please note that videos are automatically selected by Youtube and that results may vary! Click on the "Load Next Video" button to view the next video in the search playlist. In many cases, you'll find episodes of old TV shows, documentaries, music videos and soap dramas.