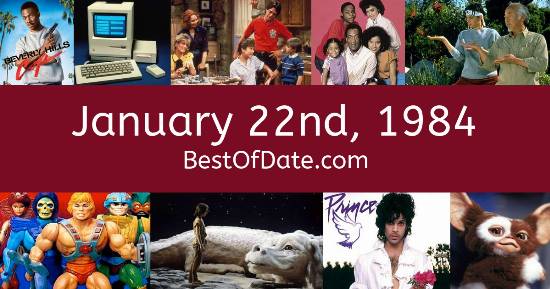 Songs that were on top of the music singles charts in the USA and the United Kingdom on January 22nd, 1984.

The movie "Terms of Endearment" was at the top of the box office on January 22nd, 1984.

The date is January 22nd, 1984 and it's a Sunday. Anyone born today will have the star sign Aquarius. Currently, people are enjoying their weekend.

In America, the song Owner Of A Lonely Heart by Yes is on top of the singles charts. Over in the UK, Pipes Of Peace by Paul McCartney is the number one hit song. Ronald Reagan is currently the President of the United States and the movie Terms of Endearment is at the top of the Box Office.

On TV, people are watching popular shows such as "The Jeffersons", "Knight Rider", "'Allo 'Allo!" and "Scarecrow and Mrs. King". Meanwhile, gamers are playing titles such as "Galaxian", "Pac-Man", "Missile Command" and "Donkey Kong". Children and teenagers are currently watching television shows such as "Happy Days", "Cockleshell Bay", "Danger Mouse" and "Alvin and the Chipmunks".

Popular toys at the moment include the likes of the Easy-Bake Oven, Hungry Hungry Hippos, Water Ring Toss and Monchhichi / Chicaboo.

If you are looking for some childhood nostalgia, then check out January 22nd, 1990 instead.

Celebrities, historical figures and notable people who were born on the 22nd of January.

Ronald Reagan was the President of the United States on January 22nd, 1984.

Margaret Thatcher was the Prime Minister of the United Kingdom on January 22nd, 1984.

Enter your date of birth below to find out how old you were on January 22nd, 1984.

Here are some fun statistics about January 22nd, 1984.