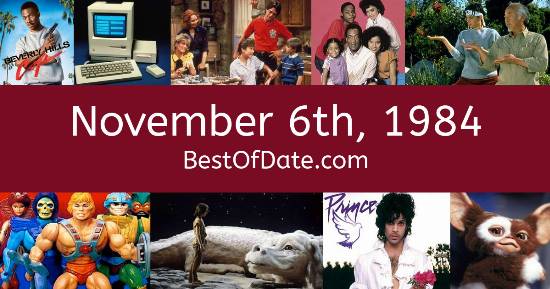 Songs that were on top of the music singles charts in the USA and the United Kingdom on November 6th, 1984.

The movie "The Terminator" was at the top of the box office on November 6th, 1984.

The date is November 6th, 1984 and it's a Tuesday. Anyone born today will have the star sign Scorpio. It's November, so the evenings are getting darker and the days are getting colder.

In America, the song Caribbean Queen by Billy Ocean is on top of the singles charts. Over in the UK, I Feel For You by Chaka Kahn is the number one hit song. Ronald Reagan is currently the President of the United States and the movie The Terminator is at the top of the Box Office.

On TV, people are watching popular shows such as "Dallas", "Magnum, P.I.", "Scarecrow and Mrs. King" and "Kate & Allie". Meanwhile, gamers are playing titles such as "Space Invaders", "Donkey Kong", "Mario Bros." and "Duck Hunt". Kids and teenagers are watching TV shows such as "The Smurfs", "Dungeons & Dragons", "Alvin and the Chipmunks" and "Heathcliff & the Catillac Cats".

Popular toys at the moment include the likes of Big Jim (action figure), the Lego train set, the Commodore 64 and Transformers.

If you are looking for some childhood nostalgia, then check out November 6th, 1990 instead.

Actress.
Born on November 6th, 1988
She was born exactly 4 years after this date.

American soccer player.
Born on November 6th, 1989
He was born exactly 5 years after this date.

Ronald Reagan was the President of the United States on November 6th, 1984.

Margaret Thatcher was the Prime Minister of the United Kingdom on November 6th, 1984.

Enter your date of birth below to find out how old you were on November 6th, 1984.

Here are some fun statistics about November 6th, 1984.

Have something to say about November 6th, 1984?