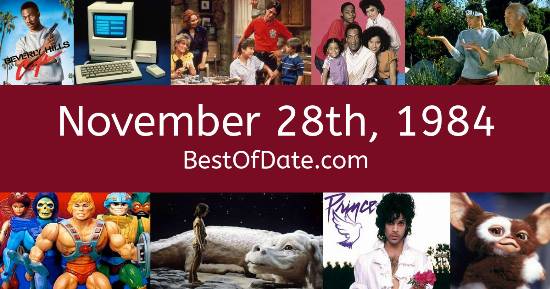 Songs that were on top of the music singles charts in the USA and the United Kingdom on November 28th, 1984.

The date is November 28th, 1984 and it's a Wednesday. Anyone born today will have the star sign Sagittarius. It's November, so the evenings are getting darker and the days are getting colder.

In America, the song Wake Me Up Before You Go-go by Wham is on top of the singles charts. Over in the UK, I Should Have Known Better by Jim Diamond is the number one hit song. Ronald Reagan is currently the President of the United States and the movie Supergirl is at the top of the Box Office.

On TV, people are watching popular shows such as "Magnum, P.I.", "Knight Rider", "Who's the Boss?" and "The Cosby Show". Meanwhile, gamers are playing titles such as "Space Invaders", "Pac-Man", "Duck Hunt" and "Tetris". Children and teenagers are currently watching television shows such as "Fat Albert and the Cosby Kids", "Cockleshell Bay", "Danger Mouse" and "Inspector Gadget".

If you're a kid or a teenager, then you're probably playing with toys such as the Easy-Bake Oven, Cabbage Patch Kids, Fisher-Price Little People (Farm) and the Commodore 64.

Celebrities, historical figures and notable people who were born on the 28th of November.

Ronald Reagan was the President of the United States on November 28th, 1984.

Margaret Thatcher was the Prime Minister of the United Kingdom on November 28th, 1984.

Enter your date of birth below to find out how old you were on November 28th, 1984.

Here are some fun statistics about November 28th, 1984.

Leave a comment and tell everyone why November 28th, 1984 is important to you.