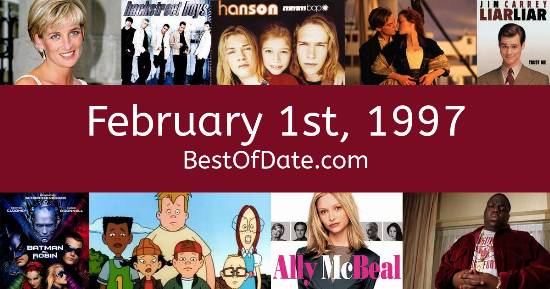 Songs that were on top of the music singles charts in the USA and the United Kingdom on February 1st, 1997.

The movie "Jerry Maguire" was at the top of the box office on February 1st, 1997.

The date is February 1st, 1997 and it's a Saturday. Anyone born today will have the star sign Aquarius. Currently, people are enjoying their weekend.

In America, the song Un-break My Heart by Toni Braxton is on top of the singles charts. Over in the UK, Beetlebum by Blur is the number one hit song. Bill Clinton is currently the President of the United States and the movie Jerry Maguire is at the top of the Box Office.

If you were to travel back to this day, notable figures such as The Notorious B.I.G, Gianni Versace, Princess Diana and Mother Teresa would all be still alive. On TV, people are watching popular shows such as "Baywatch", "Martin", "Lois & Clark: The New Adventures of Superman" and "3rd Rock from the Sun". Meanwhile, gamers are playing titles such as "Virtua Fighter 2", "Blood Omen: Legacy of Kain", "Donkey Kong Country 3: Dixie Kong's Double Trouble!" and "Diablo".

Children and teenagers are currently watching television shows such as "Tales from the Cryptkeeper", "The Magic School Bus", "Johnny Bravo" and "Hey Arnold!". If you're a kid or a teenager, then you're probably playing with toys such as Jenga, Lego Pirates, Tickle Me Elmo and the Pokémon Trading Card Game.

If you are looking for some childhood nostalgia, then check out February 1st, 2003 instead.

Bill Clinton was the President of the United States on February 1st, 1997.

John Major was the Prime Minister of the United Kingdom on February 1st, 1997.

Enter your date of birth below to find out how old you were on February 1st, 1997.

Here are some fun statistics about February 1st, 1997.

Have something to say about February 1st, 1997?