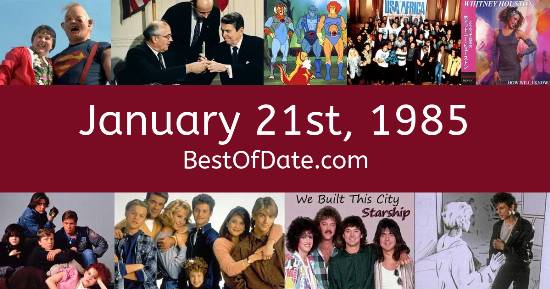 Songs that were on top of the music singles charts in the USA and the United Kingdom on January 21st, 1985:

The date is January 21st, 1985 and it's a Monday. Anyone born today will have the star sign Aquarius. In America, the song Like A Virgin by Madonna is on top of the singles charts.

Over in the UK, I Want To Know What Love Is by Foreigner is the number one hit song. Ronald Reagan is currently the President of the United States and the movie Beverly Hills Cop is at the top of the Box Office. In the United Kingdom, Margaret Thatcher is the current Prime Minister.

In fashion, women are currently wearing long sweaters, fishnet stockings, fingerless gloves, jumpsuits, over-sized scarves, miniskirts, stirrup pants and spandex cycling shorts. Meanwhile, men are wearing Hawaiian shirts, flannel, shell suits and wool sport coats. Because it's 1985, the radio stations are being dominated by the likes of Tears For Fears, USA For Africa, A-ha, Foreigner, Madonna, Wham! and Phil Collins. On TV, people are watching popular shows such as "The Dukes of Hazzard", "Only Fools and Horses", "The Transformers" and "Punky Brewster".

Meanwhile, gamers are playing titles such as "Galaxian", "Duck Hunt", "Tetris" and "Boulder Dash". Kids and teenagers are watching TV shows such as "Diff'rent Strokes", "Inspector Gadget", "Dungeons & Dragons" and "The Transformers". If you're a kid or a teenager, then you're probably playing with toys such as "Big wheel (tricycle)", "My Little Pony (figures)", "Pound Puppies" and "Pogo ball / Lolo ball".

Celebrities, historical figures and noteable people who were born on the 21st of January:

Who was the Prime Minister of the United Kingdom on January 21st, 1985?

Enter your date of birth below to find out how old you were on January 21st, 1985.

Looking for some nostalgia? Here are some Youtube videos relating to January 21st, 1985. Please note that videos are automatically selected by Youtube and that results may vary! Click on the "Load Next Video" button to view the next video in the search playlist. In many cases, you'll find episodes of old TV shows, documentaries, music videos and soap dramas.

Here are some fun statistics about January 21st, 1985.