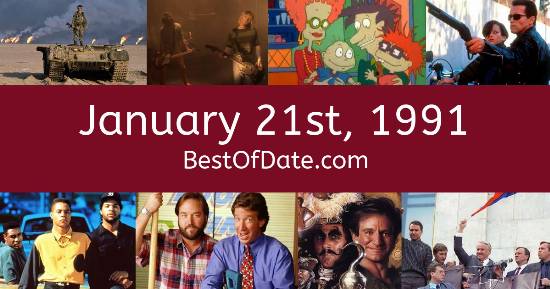 Songs that were on top of the music singles charts in the USA and the United Kingdom on January 21st, 1991.

The date is January 21st, 1991 and it's a Monday. Anyone born today will have the star sign Aquarius. In America, the song The First Time by Surface is on top of the singles charts.

Over in the UK, Innuendo by Queen is the number one hit song. George W. Bush Snr. is currently the President of the United States and the movie Home Alone is at the top of the Box Office. In the United Kingdom, John Major is the current Prime Minister.

It's 1991, so the airwaves are being dominated by artists such as Bryan Adams, Michael Jackson, Roxette, R.E.M., Color Me Badd and Paula Abdul. In the Middle East, Operation Desert storm has commenced in response to Iraq's failure to withdraw from Kuwait. Coalition forces are now carrying out air strikes on strategic targets in both Iraq and Kuwait. In Utah, 3 people have been crushed to death at an AC/DC concert in Salt Lake City.

In Europe, the Soviet Union is continuing to unravel. If you were to travel back to this day, notable figures such as John Bardeen, Miles Davis, Freddie Mercury and Robert Reed would all be still alive. On TV, people are watching popular shows such as "Sherlock Holmes", "The Cosby Show", "Married... with Children" and "Quantum Leap".

Meanwhile, gamers are playing titles such as "SimCity", "Herzog Zwei", "Railroad Tycoon" and "Castle of Illusion Starring Mickey Mouse". Kids and teenagers are watching TV shows such as "The Real Ghostbusters", "21 Jump Street", "Babar" and "Are You Afraid of the Dark?". If you're a kid or a teenager, then you're probably playing with toys such as the Easy-Bake Oven, Transformers, Polly Pocket and Yo-yo.

If you are looking for some childhood nostalgia, then check out January 21st, 1997 instead.

George W. Bush Snr. was the President of the United States on January 21st, 1991.

John Major was the Prime Minister of the United Kingdom on January 21st, 1991.

Enter your date of birth below to find out how old you were on January 21st, 1991.

Here are some fun statistics about January 21st, 1991.