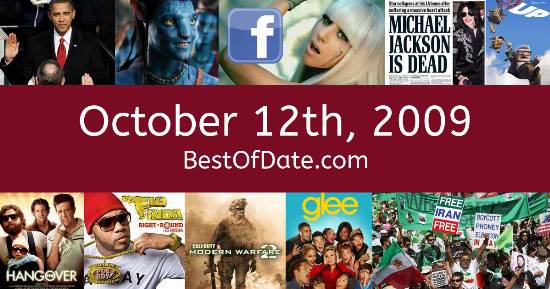 Songs that were on top of the music singles charts in the USA and the United Kingdom on October 12th, 2009:

The date is October 12th, 2009 and it's a Monday. Anyone born today will have the star sign Libra. The summer is long gone. Temperatures have started to become much cooler and the evenings are beginning to get darker.

Fallen leaves have carpeted driveways, lawns, pathways and sidewalks and there's a fresh earthy scent in the ear. In America, the song Down by Jay Sean ft Lil Wayne is on top of the singles charts. Over in the UK, Bad Boys by Alexandra Burke is the number one hit song.

Barack Obama is currently the President of the United States and the movie Couples Retreat is at the top of the Box Office. In the United Kingdom, Gordon Brown is the current Prime Minister. A social network called Facebook is beginning to surge in popularity, replacing the likes of MySpace.

Meanwhile, gaming fans are currently excited about the upcoming release of Call of Duty: Modern Warfare 2. In celebrity news, it has been announced that singer Avril Lavigne has filed for divorce from Sum 41 Deryck Whibley singer after three years of marriage. On TV, people are watching popular shows such as "Futurama", "Smallville", "Breaking Bad" and "Modern Family".

Meanwhile, gamers are playing titles such as "Dead Space", "Minecraft", "Batman: Arkham Asylum" and "Halo 3: ODST". Kids and teenagers are watching TV shows such as "Peppa Pig", "LazyTown", "The Suite Life on Deck" and "Glee". If you're a kid or a teenager, then you're probably playing with toys such as "Xbox 360", "PlayStation 3", "WALL-E toys" and "ZhuZhu Pets".

National holidays and famous events that fall on the 12th of October:

Who was the Prime Minister of the United Kingdom on October 12th, 2009?

Enter your date of birth below to find out how old you were on October 12th, 2009.

Looking for some nostalgia? Here are some Youtube videos relating to October 12th, 2009. Please note that videos are automatically selected by Youtube and that results may vary! Click on the "Load Next Video" button to view the next video in the search playlist. In many cases, you'll find episodes of old TV shows, documentaries, music videos and soap dramas.

Here are some fun statistics about October 12th, 2009.