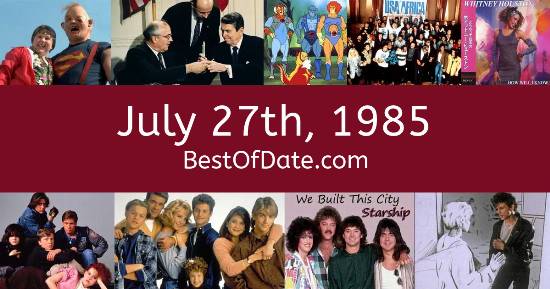 On July 27th, 1985, the following songs were at the top of the music charts in the USA and the UK.

The top "Box Office" movie on this date was the film "European Vacation".

The date is July 27th, 1985, and it's a Saturday. Anyone born today will have the star sign Leo. Currently, people are enjoying their weekend.

It's summer, so the temperatures are warmer and the evenings are longer than usual. In America, the song Everytime You Go Away by Paul Young is on top of the singles charts. Over in the UK, There Must Be An Angel by Eurythmics is the number one hit song.

Because it's 1985, the radio stations are being dominated by the likes of Tears For Fears, USA For Africa, A-ha, Foreigner, Madonna, Wham! and Phil Collins. If you were to travel back to this day, notable figures such as Rock Hudson, Paul Castellano, Phil Lynott and Christa McAuliffe would all be still alive. On TV, people are watching popular shows such as "The Facts of Life", "Cagney & Lacey", "Kate & Allie" and "The Transformers".

Meanwhile, gamers are playing titles such as "Asteroids", "Duck Hunt", "The Way of the Exploding Fist" and "Back to the Future". Kids and teenagers are watching TV shows such as "Mister Rogers' Neighborhood", "The Smurfs", "Fraggle Rock" and "Mister T". Popular toys at the moment include the likes of Water Ring Toss, Monchhichi / Chicaboo, Transformers and Mr Frosty.

These are trending news stories and fads that were prevalent at this time. These are topics that would have been in the media on July 27th, 1985.

News stories and other events that happened around July 27th, 1985.

Check out our personality summary for people who were born on July 27th, 1985.

If you are looking for some childhood nostalgia, then you should check out July 27th, 1991 instead.

Youtube personality.
Born on July 27th, 1990
He was born exactly 5 years after this date.

Ronald Reagan was the President of the United States on July 27th, 1985.

Margaret Thatcher was the Prime Minister of the United Kingdom on July 27th, 1985.

Find out what your age was on July 27th, 1985, by entering your DOB below.
This information is not saved on our server.