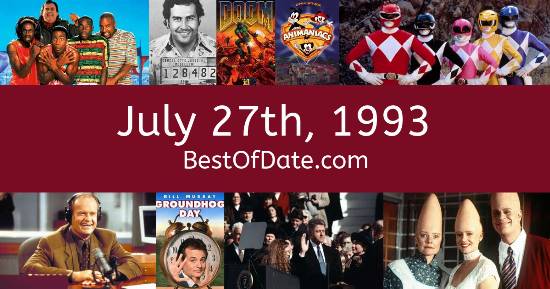 Songs that were on top of the music singles charts in the USA and the United Kingdom on July 27th, 1993.

The date is July 27th, 1993 and it's a Tuesday. Anyone born today will have the star sign Leo. It's summer, so the temperatures are warmer and the evenings are longer than usual.

In America, the song Can't Help Falling In Love by UB40 is on top of the singles charts. Over in the UK, Pray by Take That is the number one hit song. Bill Clinton is currently the President of the United States and the movie Poetic Justice is at the top of the Box Office.

A playing discs game called "Pogs" is currently spreading in popularity throughout the world. It's 1993, so radio stations are being dominated by the likes of Meat Loaf, UB40, Snow, Haddaway, Whitney Houston, Take That, Janet Jackson and Mariah Carey. The films "Free Willy", "Coneheads" and "Hocus Pocus" have all recently been released in movie theaters.

In Cape Town, South Africa, eleven people have been killed in a terrorist attack by the APLA. The attack happened when four members of the APLA opened fire on a congregation inside St James Church in Kenilworth. In technology news, Microsoft has just released its new operating system "Windows NT 3.1". If you were to travel back to this day, notable figures such as Reggie Lewis, Vincent Price, River Phoenix and Frank Zappa would all be still alive.

On TV, people are watching popular shows such as "Last of the Summer Wine", "One Foot in the Grave", "Dinosaurs" and "Mad About You". Meanwhile, gamers are playing titles such as "Street Fighter II: The World Warrior", "Sonic the Hedgehog 2", "FIFA International Soccer" and "Mortal Kombat II". Children and teenagers are currently watching television shows such as "Thomas the Tank Engine", "The Simpsons", "Are You Afraid of the Dark?" and "Taz-Mania".

Popular toys at the moment include the likes of the Ghostbusters Proton Pack, the Game Boy, Lego Pirates and the Super Nintendo Entertainment System (SNES).

If you are looking for some childhood nostalgia, then check out July 27th, 1999 instead.

Bill Clinton was the President of the United States on July 27th, 1993.

John Major was the Prime Minister of the United Kingdom on July 27th, 1993.