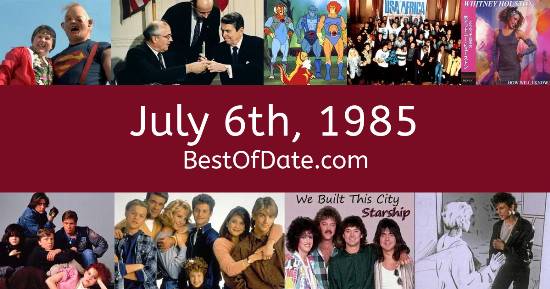 Songs that were on top of the music singles charts in the USA and the United Kingdom on July 6th, 1985.

The date is July 6th, 1985 and it's a Saturday. Anyone born today will have the star sign Cancer. Currently, people are enjoying their weekend.

The 4th of July celebrations in America have come and passed. It's summer, so the temperatures are warmer and the evenings are longer than usual. In America, the song Sussudio by Phil Collins is on top of the singles charts.

Over in the UK, Frankie by Sister Sledge is the number one hit song. Ronald Reagan is currently the President of the United States and the movie Pale Rider is at the top of the Box Office. In the United Kingdom, Margaret Thatcher is the current Prime Minister.

On TV, people are watching popular shows such as "Last of the Summer Wine", "Knight Rider", "Sherlock Holmes" and "Miami Vice". Meanwhile, gamers are playing titles such as "Asteroids", "Missile Command", "Mario Bros." and "Duck Hunt". Kids and teenagers are watching TV shows such as "Mister Rogers' Neighborhood", "Schoolhouse Rock!", "The Smurfs" and "Muppet Babies".

If you are looking for some childhood nostalgia, then check out July 6th, 1991 instead.

Ronald Reagan was the President of the United States on July 6th, 1985.

Margaret Thatcher was the Prime Minister of the United Kingdom on July 6th, 1985.

Enter your date of birth below to find out how old you were on July 6th, 1985.

Here are some fun statistics about July 6th, 1985.