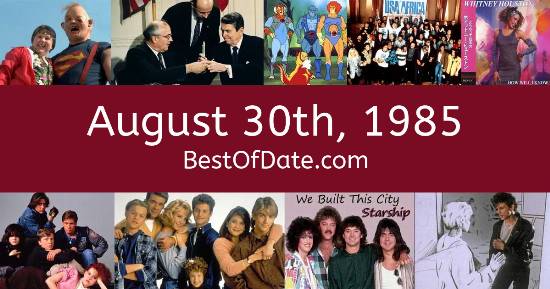 Songs that were on top of the music singles charts in the USA and the United Kingdom on August 30th, 1985.

The movie "European Vacation" was at the top of the box office on August 30th, 1985.

The date is August 30th, 1985 and it's a Friday. Anyone born today will have the star sign Virgo. Currently, people have "that Friday feeling" and are looking forward to the weekend.

The summer of 1985 is coming to an end and fall is just around the corner. In America, the song The Power Of Love by Huey Lewis & the News is on top of the singles charts. Over in the UK, I Got You Babe by UB40 & Chrissie Hynde is the number one hit song.

Because it's 1985, the radio stations are being dominated by the likes of Tears For Fears, USA For Africa, A-ha, Foreigner, Madonna, Wham! and Phil Collins. If you were to travel back to this day, notable figures such as Rock Hudson, Paul Castellano, Phil Lynott and Christa McAuliffe would all be still alive. On TV, people are watching popular shows such as "Scarecrow and Mrs. King", "Sherlock Holmes", "Who's the Boss?" and "The Cosby Show".

Meanwhile, gamers are playing titles such as "Missile Command", "Donkey Kong", "Mario Bros." and "Tetris". Children and teenagers are currently watching television shows such as "Mister Rogers' Neighborhood", "G.I. Joe: A Real American Hero", "The Charlie Brown and Snoopy Show" and "Heathcliff". If you're a kid or a teenager, then you're probably playing with toys such as Lite-Brite, Big Jim (action figure), Hungry Hungry Hippos and Pogo ball / Lolo ball.

If you are looking for some childhood nostalgia, then check out August 30th, 1991 instead.

Celebrities, historical figures and other notable people who were born on August 30th.

Ronald Reagan was the President of the United States on August 30th, 1985.

Margaret Thatcher was the Prime Minister of the United Kingdom on August 30th, 1985.

Enter your date of birth below to find out how old you were on August 30th, 1985.