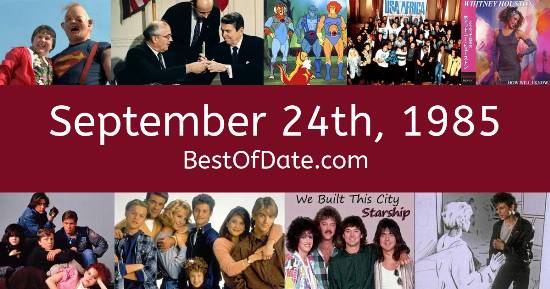 Songs that were on top of the music singles charts in the USA and the United Kingdom on September 24th, 1985.

The date is September 24th, 1985 and it's a Tuesday. Anyone born today will have the star sign Libra. Schools have started back and autumn has arrived, so temperatures have started to cool and trees are beginning to shed their leaves.

The earthy smells of fall have started to fill the air. In America, the song Money For Nothing by Dire Straits is on top of the singles charts. Over in the UK, Dancing In The Street by David Bowie & Mick Jagger is the number one hit song.

Ronald Reagan is currently the President of the United States and the movie Back to the Future is at the top of the Box Office. In the United Kingdom, Margaret Thatcher is the current Prime Minister. In fashion, women are currently wearing long sweaters, fishnet stockings, fingerless gloves, jumpsuits, over-sized scarves, miniskirts, stirrup pants and spandex cycling shorts. Meanwhile, men are wearing Hawaiian shirts, flannel, shell suits and wool sport coats.

Because it's 1985, the radio stations are being dominated by the likes of Tears For Fears, USA For Africa, A-ha, Foreigner, Madonna, Wham! and Phil Collins. On TV, people are watching popular shows such as "Only Fools and Horses", "Cagney & Lacey", "Knight Rider" and "Kate & Allie". Meanwhile, gamers are playing titles such as "Asteroids", "Missile Command", "Duck Hunt" and "Super Mario Bros.".

Children and teenagers are currently watching television shows such as "The Smurfs", "Inspector Gadget", "Fraggle Rock" and "He-Man and the Masters of the Universe". If you're a kid or a teenager, then you're probably playing with toys such as Lite-Brite, Water Ring Toss, the Commodore 64 and Sylvanian Families.

If you are looking for some childhood nostalgia, then check out September 24th, 1991 instead.

Rugby player.
Born on September 24th, 1991
He was born exactly 6 years after this date.

Ronald Reagan was the President of the United States on September 24th, 1985.

Margaret Thatcher was the Prime Minister of the United Kingdom on September 24th, 1985.

Enter your date of birth below to find out how old you were on September 24th, 1985.

Here are some fun statistics about September 24th, 1985.