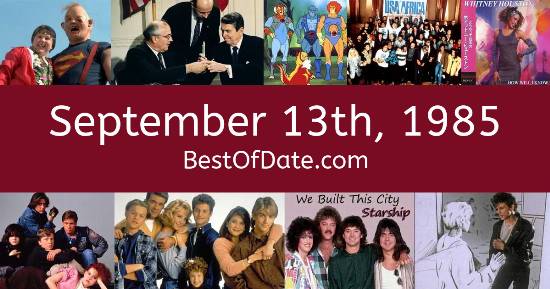 These songs were on top of the music charts in the United States and the United Kingdom on September 13th, 1985.

The date is September 13th, 1985, and it's a Friday. Anyone born today will have the star sign Virgo. Currently, people have "that Friday feeling" and are looking forward to the weekend.

Schools and colleges are starting again and Autumn has officially arrived. As a result, temperatures are beginning to cool and trees are starting to shed their leaves. In America, the song St. Elmo's Fire by John Parr is on top of the singles charts. Over in the UK, Dancing In The Street by David Bowie & Mick Jagger is the number one hit song.

Because it's 1985, the radio stations are being dominated by the likes of Tears For Fears, USA For Africa, A-ha, Foreigner, Madonna, Wham! and Phil Collins. If you were to travel back to this day, notable figures such as Rock Hudson, Paul Castellano, Phil Lynott and Christa McAuliffe would all be still alive. On TV, people are watching popular shows such as "The Facts of Life", "Family Ties", "Sherlock Holmes" and "The Transformers".

Meanwhile, gamers are playing titles such as "Lunar Lander", "Asteroids", "Galaxian" and "Missile Command". Children and teenagers are currently watching television shows such as "The Bugs Bunny Show", "Alvin and the Chipmunks", "The Transformers" and "Thomas the Tank Engine". If you're a kid or a teenager, then you're probably playing with toys such as the Easy-Bake Oven, Water Ring Toss, My Little Pony (figures) and Transformers.

These are trending news stories and fads that were prevalent at this time. These are topics that would have been in the media on September 13th, 1985.

News stories and other events that happened around September 13th, 1985.

Check out our personality summary for people who were born on September 13th, 1985.

If you are looking for some childhood nostalgia, then you should check out September 13th, 1991 instead.

Brazilian Youtube personality.
Born on September 13th, 1988
He was born exactly 3 years after this date.

Singer.
Born on September 13th, 1993
He was born exactly 8 years after this date.

Ronald Reagan was the President of the United States on September 13th, 1985.

Margaret Thatcher was the Prime Minister of the United Kingdom on September 13th, 1985.

Find out what your age was on September 13th, 1985, by entering your DOB below.
This information is not saved on our server.

Here are some fun statistics about September 13th, 1985.