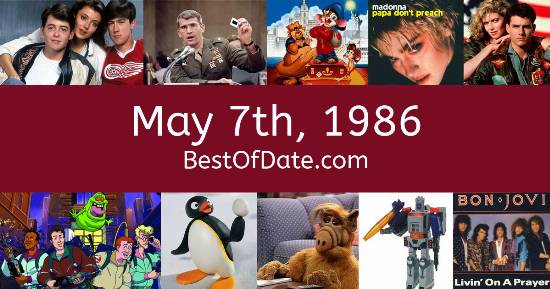 Songs that were on top of the music singles charts in the USA and the United Kingdom on May 7th, 1986.

The date is May 7th, 1986 and it's a Wednesday. Anyone born today will have the star sign Taurus. The summer of 1986 has finally arrived. The weather has warmed up and the evenings are brighter than usual.

In America, the song West End Girls by Pet Shop Boys is on top of the singles charts. Over in the UK, Rock Me Amadeus by Falco is the number one hit song. Ronald Reagan is currently the President of the United States and the movie Jo Jo Dancer, Your Life is Calling is at the top of the Box Office.

On TV, people are watching popular shows such as "Last of the Summer Wine", "Knots Landing", "Punky Brewster" and "The Golden Girls". Meanwhile, gamers are playing titles such as "Asteroids", "Donkey Kong", "Duck Hunt" and "Back to the Future". Children and teenagers are currently watching television shows such as "Danger Mouse", "Inspector Gadget", "Alvin and the Chipmunks" and "The Cosby Show".

If you're a kid or a teenager, then you're probably playing with toys such as Lite-Brite, Cabbage Patch Kids, Big wheel (tricycle) and Pogo ball / Lolo ball.

Notable events that occurred around May 7th, 1986.

If you are looking for some childhood nostalgia, then check out May 7th, 1992 instead.

Celebrities, historical figures and notable people who were born on the 7th of May.

Historical weather information for May 7th, 1986.

Ronald Reagan was the President of the United States on May 7th, 1986.

Margaret Thatcher was the Prime Minister of the United Kingdom on May 7th, 1986.

Enter your date of birth below to find out how old you were on May 7th, 1986.