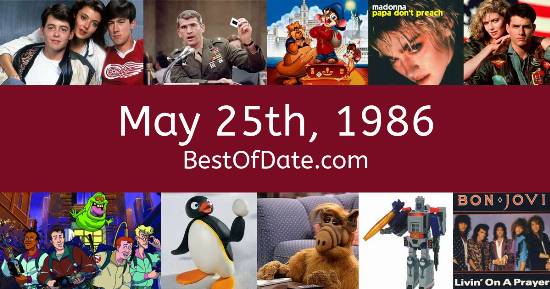 Songs that were on top of the music singles charts in the USA and the United Kingdom on May 25th, 1986.

The date is May 25th, 1986 and it's a Sunday. Anyone born today will have the star sign Gemini. Currently, people are enjoying their weekend.

Children and teenagers are currently watching television shows such as "The Bugs Bunny Show", "Fraggle Rock", "Alvin and the Chipmunks" and "ThunderCats". Popular toys at the moment include the likes of the Easy-Bake Oven, Dungeons & Dragons, Water Ring Toss and Teddy Ruxpin.

Notable events that occurred around May 25th, 1986.

If you are looking for some childhood nostalgia, then check out May 25th, 1992 instead.

Celebrities, historical figures and notable people who were born on the 25th of May.

Historical weather information for May 25th, 1986.

Ronald Reagan was the President of the United States on May 25th, 1986.

Margaret Thatcher was the Prime Minister of the United Kingdom on May 25th, 1986.