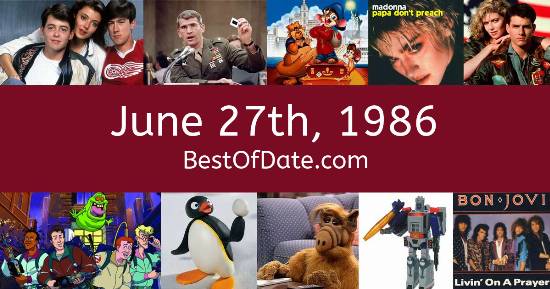 Songs that were on top of the music singles charts in the USA and the United Kingdom on June 27th, 1986.

The date is June 27th, 1986 and it's a Friday. Anyone born today will have the star sign Cancer. Currently, people have "that Friday feeling" and are looking forward to the weekend.

Ronald Reagan is currently the President of the United States and the movie Back to School is at the top of the Box Office. In the United Kingdom, Margaret Thatcher is the current Prime Minister. Because it's 1986, the radio stations are being dominated by the likes of Falco, Madonna, the Pet Shop Boys, Berlin, Whitney Houston, Dionne and Huey Lewis and the News.

Meanwhile, gamers are playing titles such as "Missile Command", "Boulder Dash", "Ultima IV: Quest of the Avatar" and "Gauntlet". Kids and teenagers are watching TV shows such as "Mister Rogers' Neighborhood", "The Smurfs", "Danger Mouse" and "The Transformers". If you're a kid or a teenager, then you're probably playing with toys such as Dungeons & Dragons, Speak & Spell, Big wheel (tricycle) and Pogo ball / Lolo ball.

If you are looking for some childhood nostalgia, then check out June 27th, 1992 instead.

Ronald Reagan was the President of the United States on June 27th, 1986.

Margaret Thatcher was the Prime Minister of the United Kingdom on June 27th, 1986.