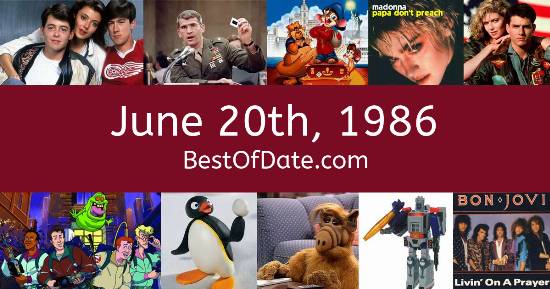 Songs that were on top of the music singles charts in the USA and the United Kingdom on June 20th, 1986.

The date is June 20th, 1986 and it's a Friday. Anyone born today will have the star sign Gemini. Currently, people have "that Friday feeling" and are looking forward to the weekend.

It's summer, so the temperatures are warmer and the evenings are longer than usual. In America, the song On My Own by Patti LaBelle & Michael McDonald is on top of the singles charts. Over in the UK, Spirit In The Sky by Doctor & Medics is the number one hit song.

Ronald Reagan is currently the President of the United States and the movie Back to School is at the top of the Box Office. In the United Kingdom, Margaret Thatcher is the current Prime Minister. In fashion, women are currently wearing sweater dresses, short skirts, small shoulder pads, animal print, long full wool coats and bulky sweaters. Meanwhile, men are wearing tracksuits, sweatshirts, Nike Air Jordan shoes and denim.

Because it's 1986, the radio stations are being dominated by the likes of Falco, Madonna, the Pet Shop Boys, Berlin, Whitney Houston, Dionne and Huey Lewis and the News. Currently, the 1986 FIFA World Cup is taking place in Mexico. On TV, people are watching popular shows such as "Trapper John, M.D.", "Only Fools and Horses", "Family Ties" and "The Equalizer".

Meanwhile, gamers are playing titles such as "Missile Command", "Tetris", "Back to the Future" and "Gauntlet". Children and teenagers are currently watching television shows such as "Cockleshell Bay", "ThunderCats", "Growing Pains" and "Pingu". If you're a kid or a teenager, then you're probably playing with toys such as the Easy-Bake Oven, Lite-Brite, Water Ring Toss and the Commodore 64.

Ronald Reagan was the President of the United States on June 20th, 1986.

Margaret Thatcher was the Prime Minister of the United Kingdom on June 20th, 1986.

Leave a comment and tell everyone why June 20th, 1986 is important to you.