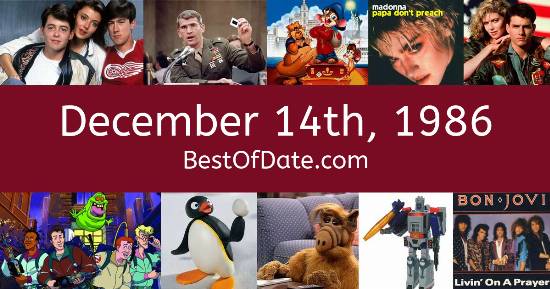 Songs that were on top of the music singles charts in the USA and the United Kingdom on December 14th, 1986.

The date is December 14th, 1986 and it's a Sunday. Anyone born today will have the star sign Sagittarius. Currently, people are enjoying their weekend.

The Christmas season of 1986 is in full swing. People are putting up their decorations and festive songs are playing on the radio. In America, the song The Way It Is by Bruce Hornsby & The Range is on top of the singles charts. Over in the UK, The Final Countdown by Europe is the number one hit song.

Because it's 1986, the radio stations are being dominated by the likes of Falco, Madonna, the Pet Shop Boys, Berlin, Whitney Houston, Dionne and Huey Lewis and the News. If you were to travel back to this day, notable figures such as Liberace, Andy Warhol, Fred Astaire and Lee Marvin would all be still alive. On TV, people are watching popular shows such as "The Facts of Life", "Magnum, P.I.", "Cagney & Lacey" and "Murder, She Wrote".

Meanwhile, gamers are playing titles such as "Asteroids", "Missile Command", "Donkey Kong" and "Duck Hunt". Children and teenagers are currently watching television shows such as "The Smurfs", "Alvin and the Chipmunks", "She-Ra: Princess of Power" and "The Real Ghostbusters". If you're a kid or a teenager, then you're probably playing with toys such as Speak & Spell, Cabbage Patch Kids, Fischer Price cassette player and the Commodore 64.

If you are looking for some childhood nostalgia, then check out December 14th, 1992 instead.

Actress and singer.
Born on December 14th, 1988
She was born exactly 2 years after this date.

Ronald Reagan was the President of the United States on December 14th, 1986.

Margaret Thatcher was the Prime Minister of the United Kingdom on December 14th, 1986.

Enter your date of birth below to find out how old you were on December 14th, 1986.

Here are some fun statistics about December 14th, 1986.