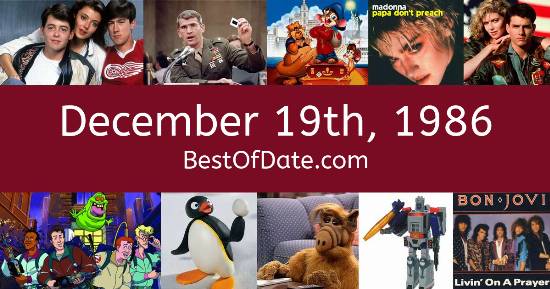 Songs that were on top of the music singles charts in the USA and the United Kingdom on December 19th, 1986:

The date is December 19th, 1986 and it's a Friday. Anyone born today will have the star sign Sagittarius. Currently, people have "that Friday feeling" and are looking forward to the weekend.

The Christmas season of 1986 is in full swing. The decorations are up and festive songs are playing on the radio. In America, the song Walk Like An Egyptian by The Bangles is on top of the singles charts. Over in the UK, Caravan Of Love by Housemartins is the number one hit song.

Because it's 1986, the radio stations are being dominated by the likes of Falco, Madonna, the Pet Shop Boys, Berlin, Whitney Houston, Dionne and Huey Lewis and the News. On TV, people are watching popular shows such as "Magnum, P.I.", "Cheers", "'Allo 'Allo!" and "The Golden Girls". Meanwhile, gamers are playing titles such as "Space Invaders", "Duck Hunt", "Tetris" and "The Legend of Zelda".

Children and teenagers are currently watching television shows such as "The Smurfs", "Fraggle Rock", "The Transformers" and "The Flintstone Kids". Popular toys include the likes of "Easy-Bake Oven", "Lite-Brite", "Snoopy Sno-Cone Machine" and "Fisher-Price Little People (Farm)".

Celebrities, historical figures and noteable people who were born on the 19th of December:

Who was the Prime Minister of the United Kingdom on December 19th, 1986?

Enter your date of birth below to find out how old you were on December 19th, 1986.

Looking for some nostalgia? Here are some Youtube videos relating to December 19th, 1986. Please note that videos are automatically selected by Youtube and that results may vary! Click on the "Load Next Video" button to view the next video in the search playlist. In many cases, you'll find episodes of old TV shows, documentaries, music videos and soap dramas.

Here are some fun statistics about December 19th, 1986.