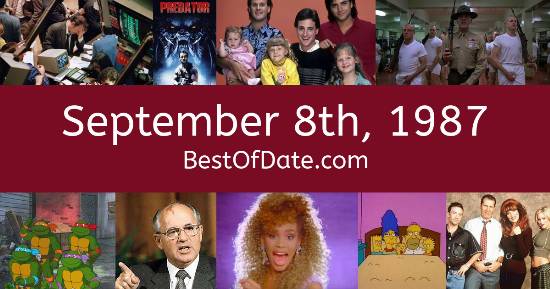 These songs were on top of the music charts in the United States and the United Kingdom on September 8th, 1987.

The movie "The Living Daylights" was at the top of the Box Office on September 8th, 1987.

The date is September 8th, 1987, and it's a Tuesday. Anyone born today will have the star sign Virgo. Schools and colleges are starting again and Autumn has officially arrived. As a result, temperatures are beginning to cool and trees are starting to shed their leaves.

In the United States, Labor Day of 1987 has recently come and passed. To many, this means that the summer is officially over. In America, the song La Bamba by Los Lobos is on top of the singles charts. Over in the UK, Never Gonna Give You Up by Rick Astley is the number one hit song.

Ronald Reagan is currently the President of the United States, and the movie The Living Daylights is at the top of the Box Office. In the United Kingdom, Margaret Thatcher is the current Prime Minister. In fashion, women are currently wearing sweater dresses, short skirts, small shoulder pads, animal print, long full wool coats and bulky sweaters. Meanwhile, men are wearing tracksuits, sweatshirts, Nike Air Jordan shoes and denim.

Because it's 1987, the radio stations are being dominated by the likes of Los Lobos, Rick Astley, Whitney Houston, the Pet Shop Boys, Bon Jovi, U2 and Madonna. If you were to travel back to this day, notable figures such as James Baldwin, Heather O'Rourke, Andy Gibb and Judith Barsi would all be still alive. On TV, people are watching popular shows such as "Last of the Summer Wine", "Dallas", "Only Fools and Horses" and "Who's the Boss?".

Meanwhile, gamers are playing titles such as "Ultima IV: Quest of the Avatar", "Zelda II: The Adventure of Link", "Contra" and "Punch-Out!!". Kids and teenagers are watching TV shows such as "Thomas the Tank Engine", "The Care Bears", "The Flintstone Kids" and "The New Adventures of Jonny Quest". Popular toys at the moment include the likes of Screwball Scramble, Pogo ball / Lolo ball, Garbage Pail Kids (trading cards) and Hot Looks (fashion model dolls).

These are trending news stories and fads that were prevalent at this time. These are topics that would have been in the media on September 8th, 1987.

Check out our personality summary for people who were born on September 8th, 1987.

Television shows that people were watching in September, 1987.

Popular video games that people were playing in September of 1987.

If you are looking for some childhood nostalgia, then you should check out September 8th, 1993 instead.

DJ. Deceased
Born on September 8th, 1989
He was born exactly 2 years after this date.

Internet personality.
Born on September 8th, 1994
He was born exactly 7 years after this date.

Soccer player.
Born on September 8th, 1994
He was born exactly 7 years after this date.

Actor.
Born on September 8th, 2002
He was born exactly 15 years after this date.

Ronald Reagan was the President of the United States on September 8th, 1987.

Enter your date of birth below to find out how old you were on September 8th, 1987.
This information is not transmitted to our server.

Here are some fun statistics about September 8th, 1987.