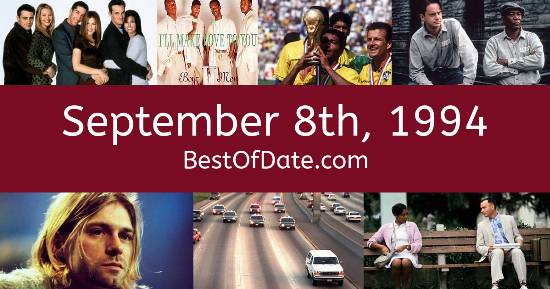 These songs were on top of the music charts in the United States and the United Kingdom on September 8th, 1994.

The movie "Natural Born Killers" was at the top of the Box Office on September 8th, 1994.

The date is September 8th, 1994, and it's a Thursday. Anyone born today will have the star sign Virgo. Schools and colleges are starting again and Autumn has officially arrived. As a result, temperatures are beginning to cool and trees are starting to shed their leaves.

In the United States, Labor Day of 1994 has recently come and passed. To many, this means that the summer is officially over. In America, the song I'll Make Love To You by Boyz II Men is on top of the singles charts. Over in the UK, Love Is All Around by Wet Wet Wet is the number one hit song.

Bill Clinton is currently the President of the United States, and the movie Natural Born Killers is at the top of the Box Office. In the United Kingdom, John Major is the current Prime Minister. Meanwhile, in technology news, a relatively new storage format called the CD is beginning to outpace the regular cassette tape in music sales. The disc-based format gives listeners the ability to skip between songs instead of having to manually rewind and forward.

It's 1994, so radio stations are being dominated by the likes of All-4-One, Boyz II Men, R. Kelly, Céline Dion, Bruce Springsteen, Bryan Adams, Meat Loaf, Bon Jovi, Wet Wet Wet, Rednex and Mariah Carey. In Europe, a war is continuing to rage on in Bosnia and Herzegovina. In Northern Ireland, the Provisional IRA have called a "complete cessation of military operations". Meanwhile, Soviet occupation in Eastern Europe has officially come to an end following the recent withdrawal of Russian troops from Latvia and Estonia.

A new catchy song called "Saturday Night" has been released by Danish eurodance artist Whigfield. The song is currently receiving constant airplay on radio stations. In music news, Aerosmith's "Cryin" has recently won Video of the Year at the 1994 MTV Video Music Awards. In the United States, 132 people have tragically lost their lives after USAir Flight 427 crashed during its approach towards a runway in Pittsburgh.

If you were to travel back to this day, notable figures such as Raul Julia, Eazy E, Selena and Bob Ross would all be still alive. On TV, people are watching popular shows such as "Matlock", "Roseanne", "Beavis and Butt-Head" and "The Nanny". Meanwhile, gamers are playing titles such as "Tiny Toon Adventures 2: Trouble in Wackyland", "Mortal Kombat II", "Mario's Time Machine" and "Super Street Fighter II".

Kids and teenagers are watching TV shows such as "Mister Rogers' Neighborhood", "Tales from the Cryptkeeper", "Rocko's Modern Life" and "Sister, Sister". If you're a kid or a teenager, then you're probably playing with toys such as Cabbage Patch Kids, Sylvanian Families, Nerf Blaster and Power Rangers figures.

These are trending news stories and fads that were prevalent at this time. These are topics that would have been in the media on September 8th, 1994.

Check out our personality summary for people who were born on September 8th, 1994.

If you are looking for some childhood nostalgia, then you should check out September 8th, 2000 instead.

Bill Clinton was the President of the United States on September 8th, 1994.

John Major was the Prime Minister of the United Kingdom on September 8th, 1994.

Enter your date of birth below to find out how old you were on September 8th, 1994.
This information is not transmitted to our server.

Here are some fun statistics about September 8th, 1994.