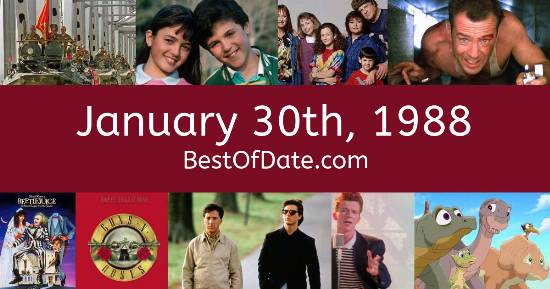 Songs that were on top of the music singles charts in the USA and the United Kingdom on January 30th, 1988.

The date is January 30th, 1988 and it's a Saturday. Anyone born today will have the star sign Aquarius. Currently, people are enjoying their weekend.

In America, the song The Way You Make Me Feel by Michael Jackson is on top of the singles charts. Over in the UK, Heaven Is A Place On Earth by Belinda Carlisle is the number one hit song. Ronald Reagan is currently the President of the United States and the movie Three Men and a Baby is at the top of the Box Office.

If you were to travel back to this day, notable figures such as Heather O'Rourke, Andy Gibb, Judith Barsi and Roy Orbison would all be still alive. On TV, people are watching popular shows such as "Columbo", "Last of the Summer Wine", "Knots Landing" and "Who's the Boss?". Meanwhile, gamers are playing titles such as "Duck Hunt", "Contra", "Mega Man" and "Metal Gear".

Children and teenagers are currently watching television shows such as "Danger Mouse", "Heathcliff", "Pingu" and "Adventures of the Little Koala". If you're a kid or a teenager, then you're probably playing with toys such as the Easy-Bake Oven, Pound Puppies, Pogo ball / Lolo ball and Jenga.

If you are looking for some childhood nostalgia, then check out January 30th, 1994 instead.

Ronald Reagan was the President of the United States on January 30th, 1988.

Margaret Thatcher was the Prime Minister of the United Kingdom on January 30th, 1988.

Enter your date of birth below to find out how old you were on January 30th, 1988.

Here are some fun statistics about January 30th, 1988.