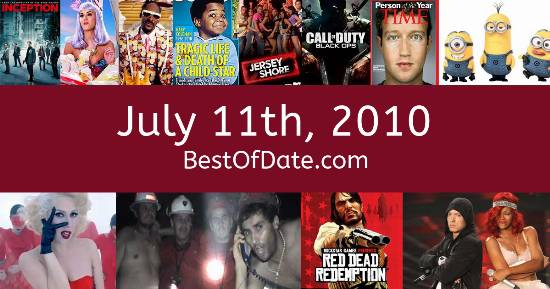 Songs that were on top of the music singles charts in the USA and the United Kingdom on July 11th, 2010.

The date is July 11th, 2010 and it's a Sunday. Anyone born today will have the star sign Cancer. Currently, people are enjoying their weekend.

It's summer, so the temperatures are warmer and the evenings are longer than usual. The song California Gurls by Katy Perry is on top of the singles charts in both the USA and the United Kingdom. Barack Obama is currently the President of the United States and the movie Despicable Me is at the top of the Box Office.

It's 2010, so the music charts are being dominated by artists such as Kesha, Katy Perry, Rihanna, Eminem and Bruno Mars. In South Africa, the 2010 FIFA World Cup is currently taking place and stadiums are being filled with the sound of vuvuzelas. In basketball, LeBron James' recent announcement that he will be leaving the Cleveland Cavaliers for Miami Heat has sparked controversy.

An audio recording of actor Mel Gibson going on a racist rant have been leaked on the Internet. As a result, Gibson has been dropped by his agency William Morris Endeavor. American Idol winner Carrie Underwood and ice hockey player Mike Fisher have just been married in Greensboro, Georgia. If you were to travel back to this day, notable figures such as Lance Cade, Denise Borino-Quinn, Pete Postlethwaite and Nate Dogg would all be still alive.

On TV, people are watching popular shows such as "Smallville", "Desperate Housewives", "How I Met Your Mother" and "Community". Meanwhile, gamers are playing titles such as "Mafia Wars", "Uncharted 2: Among Thieves", "Battlefield: Bad Company 2" and "Alan Wake". Children and teenagers are currently watching television shows such as "Dora the Explorer", "Ben 10", "The Suite Life on Deck" and "Big Time Rush".

Popular toys at the moment include the likes of Iggle Piggle, the KidiZoom Camera, ZhuZhu Pets and the iPad.

If you are looking for some childhood nostalgia, then check out July 11th, 2016 instead.

Barack Obama was the President of the United States on July 11th, 2010.

David Cameron was the Prime Minister of the United Kingdom on July 11th, 2010.