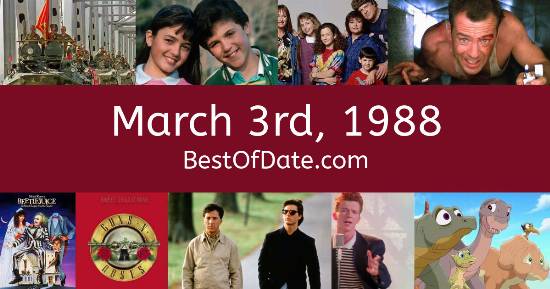 Songs that were on top of the music singles charts in the USA and the United Kingdom on March 3rd, 1988.

The date is March 3rd, 1988 and it's a Thursday. Anyone born today will have the star sign Pisces. Spring has started to creep in and the days are beginning to get longer.

In America, the song Father Figure by George Michael is on top of the singles charts. Over in the UK, I Should Be So Lucky by Kylie Minogue is the number one hit song. Ronald Reagan is currently the President of the United States and the movie Three Men and a Baby is at the top of the Box Office.

If you were to travel back to this day, notable figures such as Andy Gibb, Judith Barsi, Roy Orbison and Sugar Ray Robinson would all be still alive. On TV, people are watching popular shows such as "Cagney & Lacey", "Miami Vice", "21 Jump Street" and "Star Trek: The Next Generation". Meanwhile, gamers are playing titles such as "Tetris", "Street Fighter", "Maniac Mansion " and "Metal Gear".

Kids and teenagers are watching TV shows such as "The Smurfs", "Full House", "Fireman Sam" and "The World of David the Gnome". Popular toys at the moment include the likes of Cabbage Patch Kids, Pogo ball / Lolo ball, Laser Tag and Boglins (hand puppets).

If you are looking for some childhood nostalgia, then check out March 3rd, 1994 instead.

NFL player.
Born on March 3rd, 1993
He was born exactly 5 years after this date.

Soccer player.
Born on March 3rd, 1993
He was born exactly 5 years after this date.

Singer.
Born on March 3rd, 1997
She was born exactly 9 years after this date.

Ronald Reagan was the President of the United States on March 3rd, 1988.

Margaret Thatcher was the Prime Minister of the United Kingdom on March 3rd, 1988.

Enter your date of birth below to find out how old you were on March 3rd, 1988.

Here are some fun statistics about March 3rd, 1988.