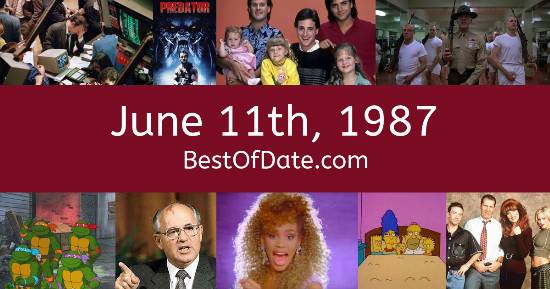 Songs that were on top of the music singles charts in the USA and the United Kingdom on June 11th, 1987.

The date is June 11th, 1987 and it's a Thursday. Anyone born today will have the star sign Gemini. It's summer, so the temperatures are warmer and the evenings are longer than usual.

In America, the song Always by Atlantic Starr is on top of the singles charts. Over in the UK, I Wanna Dance With Somebody by Whitney Houston is the number one hit song. Ronald Reagan is currently the President of the United States and the movie Beverly Hills Cop II is at the top of the Box Office.

On TV, people are watching popular shows such as "Magnum, P.I.", "Cheers", "Punky Brewster" and "The Golden Girls". Meanwhile, gamers are playing titles such as "Mario Bros.", "Tetris", "Zelda II: The Adventure of Link" and "Punch-Out!!". Children and teenagers are currently watching television shows such as "Mister Rogers' Neighborhood", "Heathcliff", "Jem and the Holograms" and "The Flintstone Kids".

If you're a kid or a teenager, then you're probably playing with toys such as Water Ring Toss, Speak & Spell, the Commodore 64 and Pound Puppies.

If you are looking for some childhood nostalgia, then check out June 11th, 1993 instead.

Ronald Reagan was the President of the United States on June 11th, 1987.

Margaret Thatcher was the Prime Minister of the United Kingdom on June 11th, 1987.