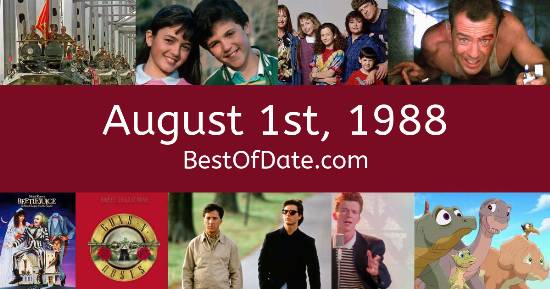 Songs that were on top of the music singles charts in the USA and the United Kingdom on August 1st, 1988.

The movie "Who Framed Roger Rabbit" was at the top of the Box Office on August 1st, 1988.

The date is August 1st, 1988, and it's a Monday. Anyone born today will have the star sign Leo. It's summer, so the temperatures are warmer and the evenings are longer than usual.

In America, the song Roll With It by Steve Winwood is on top of the singles charts. Over in the UK, Nothing's Gonna Change My Love For You by Glenn Medeiros is the number one hit song. Ronald Reagan is currently the President of the United States, and the movie Who Framed Roger Rabbit is at the top of the Box Office.

If you were to travel back to this day, notable figures such as Roy Orbison, Sugar Ray Robinson, Ruhollah Khomeini and Mel Blanc would all be still alive. On TV, people are watching popular shows such as "Magnum, P.I.", "Cheers", "The Golden Girls" and "MacGyver". Meanwhile, gamers are playing titles such as "Missile Command", "Duck Hunt", "Maniac Mansion " and "Mega Man".

Children and teenagers are currently watching television shows such as "The Bugs Bunny Show", "Heathcliff", "Adventures of the Gummi Bears" and "The Care Bears". Popular toys at the moment include the likes of Operation, My Little Pony (figures), Laser Tag and Koosh Ball.

These are trending news stories and fads that were prevalent at this time. These are topics that would have been in the media on August 1st, 1988.

News stories, pop culture trends, and other events that happened around August 1st, 1988.

Check out our personality summary for people who were born on August 1st, 1988.

If you are looking for some childhood nostalgia, then you should check out August 1st, 1994, instead.

Celebrities, historical figures, and other notable people who were born on August 1st.

National holidays and famous events that fall on the 1st of August.

Ronald Reagan was the President of the United States on August 1st, 1988.

Find out what your age was on August 1st, 1988, by entering your DOB below.
This information is not saved on our server.

Here are some fun statistics about August 1st, 1988.