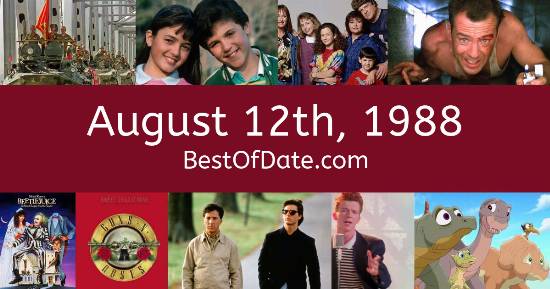 These songs were on top of the music charts in the United States and the United Kingdom on August 12th, 1988.

The movie "Young Guns" was at the top of the Box Office on this day.

The date is August 12th, 1988, and it's a Friday. Anyone born today will have the star sign Leo. Currently, people have "that Friday feeling" and are looking forward to the weekend.

It's summer, so the temperatures are warmer and the evenings are longer than usual. In America, the song Roll With It by Steve Winwood is on top of the singles charts. Over in the UK, The Only Way Is Up by Yazz is the number one hit song.

It's 1988, so the airwaves are being dominated by music artists such as Phil Collins, Bobby McFerrin, the Pet Shop Boys, Belinda Carlisle and Rick Astley. If you were to travel back to this day, notable figures such as Roy Orbison, Sugar Ray Robinson, Ruhollah Khomeini and Mel Blanc would all be still alive. On TV, people are watching popular shows such as "Columbo", "Family Ties", "Miami Vice" and "The Wonder Years".

Meanwhile, gamers are playing titles such as "Missile Command", "Double Dragon", "Maniac Mansion " and "Final Fantasy". Children and teenagers are currently watching television shows such as "The Smurfs", "Alvin and the Chipmunks", "ThunderCats" and "Fireman Sam". If you're a kid or a teenager, then you're probably playing with toys such as Speak & Spell, Fisher-Price Little People (Farm), the Commodore 64 and Jenga.

These are trending news stories and fads that were prevalent at this time. These are topics that would have been in the media on August 12th, 1988.

Check out our personality summary for people who were born on August 12th, 1988.

If you are looking for some childhood nostalgia, then you should check out August 12th, 1994 instead.

Italian soccer player.
Born on August 12th, 1990
He was born exactly 2 years after this date.

English model.
Born on August 12th, 1992
She was born exactly 4 years after this date.

Social media personality.
Born on August 12th, 2001
She was born exactly 13 years after this date.

Ronald Reagan was the President of the United States on August 12th, 1988.

Margaret Thatcher was the Prime Minister of the United Kingdom on August 12th, 1988.

Enter your date of birth below to find out how old you were on August 12th, 1988.
This information is not transmitted to our server.