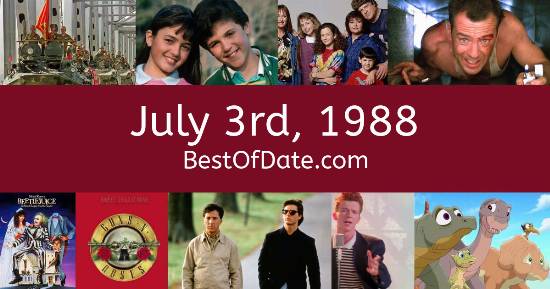 Songs that were on top of the music singles charts in the USA and the United Kingdom on July 3rd, 1988.

The movie "Who Framed Roger Rabbit" was at the top of the box office on July 3rd, 1988.

The date is July 3rd, 1988 and it's a Sunday. Anyone born today will have the star sign Cancer. Currently, people are enjoying their weekend.

In America, the July 4th celebrations are fast approaching. It's summer, so the temperatures are warmer and the evenings are longer than usual. In America, the song Foolish Beat by Debbie Gibson is on top of the singles charts.

Over in the UK, I Owe You Nothing by Bros is the number one hit song. Ronald Reagan is currently the President of the United States and the movie Who Framed Roger Rabbit is at the top of the Box Office. In the United Kingdom, Margaret Thatcher is the current Prime Minister.

In fashion, women are currently wearing sweater dresses, short skirts, small shoulder pads, animal print, long full wool coats and bulky sweaters. Meanwhile, men are wearing tracksuits, sweatshirts, Nike Air Jordan shoes and denim. It's 1988, so the airwaves are being dominated by music artists such as Phil Collins, Bobby McFerrin, the Pet Shop Boys, Belinda Carlisle and Rick Astley. If you were to travel back to this day, notable figures such as Judith Barsi, Roy Orbison, Sugar Ray Robinson and Ruhollah Khomeini would all be still alive.

On TV, people are watching popular shows such as "Knots Landing", "Magnum, P.I.", "'Allo 'Allo!" and "Sherlock Holmes". Meanwhile, gamers are playing titles such as "Missile Command", "Tetris", "Paperboy" and "Metroid". Kids and teenagers are watching TV shows such as "The Cosby Show", "Growing Pains", "Jem and the Holograms" and "Fireman Sam".

If you're a kid or a teenager, then you're probably playing with toys such as Operation, the Commodore 64, Micro Machines and Koosh Ball.

If you are looking for some childhood nostalgia, then check out July 3rd, 1994 instead.

Ronald Reagan was the President of the United States on July 3rd, 1988.

Margaret Thatcher was the Prime Minister of the United Kingdom on July 3rd, 1988.

Enter your date of birth below to find out how old you were on July 3rd, 1988.

Here are some fun statistics about July 3rd, 1988.