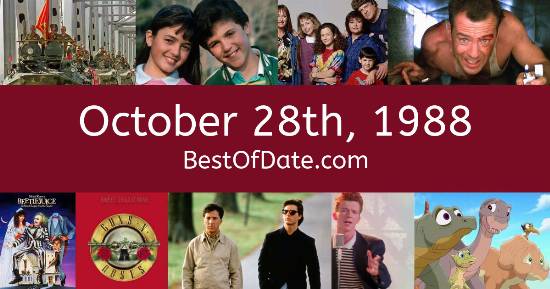 On October 28th, 1988, the following songs were at the top of the music charts in the USA and the UK.

The top "Box Office" movie on this date was the film "Halloween 4".

The date is October 28th, 1988, and it's a Friday. Anyone born today will have the star sign Scorpio. Currently, people have "that Friday feeling" and are looking forward to the weekend.

The summer is long gone. Temperatures have started to become much cooler and the evenings are beginning to get darker. Fallen leaves have carpeted driveways, lawns, pathways and sidewalks and there's a fresh earthy scent in the ear. Halloween of 1988 is just days away. People are watching horror movies and thinking about which costume they are going to wear. Others are organizing parties.

In America, the song A Groovy Kind Of Love by Phil Collins is on top of the singles charts. Over in the UK, One Moment In Time by Whitney Houston is the number one hit song. Ronald Reagan is currently the President of the United States, and the movie Halloween 4 is at the top of the Box Office.

If you were to travel back to this day, notable figures such as Roy Orbison, Sugar Ray Robinson, Ruhollah Khomeini and Mel Blanc would all be still alive. On TV, people are watching popular shows such as "'Allo 'Allo!", "The Equalizer", "21 Jump Street" and "Roseanne". Meanwhile, gamers are playing titles such as "Maniac Mansion ", "Mega Man", "Final Fantasy" and "Super Mario Bros. 3".

Children and teenagers are currently watching television shows such as "The Smurfs", "Thomas the Tank Engine", "Adventures of the Gummi Bears" and "The Real Ghostbusters". If you're a kid or a teenager, then you're probably playing with toys such as Fisher-Price Little People (Farm), Popples, Hot Looks (fashion model dolls) and Boglins (hand puppets).

These are trending news stories and fads that were prevalent at this time. These are topics that would have been in the media on October 28th, 1988.

Check out our personality summary for people who were born on October 28th, 1988.

If you are looking for some childhood nostalgia, then you should check out October 28th, 1994 instead.

Rugby player.
Born on October 28th, 1993
He was born exactly 5 years after this date.

Rugby player.
Born on October 28th, 1994
He was born exactly 6 years after this date.

Ronald Reagan was the President of the United States on October 28th, 1988.

Enter your date of birth below to find out how old you were on October 28th, 1988.
This information is not transmitted to our server.

Here are some fun statistics about October 28th, 1988.