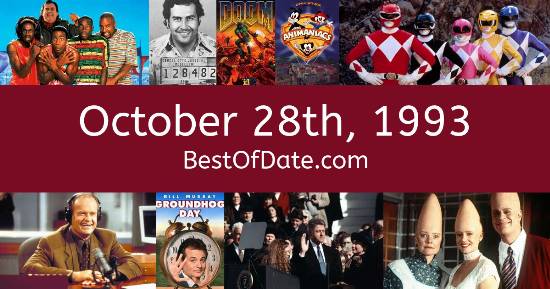 On October 28th, 1993, the following songs were at the top of the music charts in the USA and the UK.

The date is October 28th, 1993, and it's a Thursday. Anyone born today will have the star sign Scorpio. The summer is long gone. Temperatures have started to become much cooler and the evenings are beginning to get darker.

Fallen leaves have carpeted driveways, lawns, pathways and sidewalks and there's a fresh earthy scent in the ear. Halloween of 1993 is just days away. People are watching horror movies and thinking about which costume they are going to wear. Others are organizing parties. In America, the song Dream Lover by Mariah Carey is on top of the singles charts.

Over in the UK, I'd Do Anything For Love by Meat Loaf is the number one hit song. Bill Clinton is currently the President of the United States, and the movie The Beverly Hillbillies is at the top of the Box Office. In the United Kingdom, John Major is the current Prime Minister.

In music news, singer Mariah Carey has released her new single "Hero". In baseball, the Toronto Blue Jays have just won the 1993 World Series for the second time in two years after defeating the Philadelphia Phillies by four games to two. Actor Vincent Price, who was best known for starring in horror films, has passed away from lung cancer at the age of 82. Most recently, Price had played a role in Tim Burton's "Edward Scissorhands" (1990).

If you were to travel back to this day, notable figures such as River Phoenix, Frank Zappa, Bill Hicks and John Candy would all be still alive. On TV, people are watching popular shows such as "Last of the Summer Wine", "Murder, She Wrote", "Step by Step" and "The X-Files". Meanwhile, gamers are playing titles such as "Desert Strike ", "Evander Holyfield's Real Deal Boxing", "Mortal Kombat" and "Tecmo NBA Basketball".

Kids and teenagers are watching TV shows such as "Clarissa Explains It All", "Rugrats", "X-Men: The Animated Series" and "Mighty Morphin Power Rangers". If you're a kid or a teenager, then you're probably playing with toys such as Lego Pirates, the Super Nintendo Entertainment System (SNES), Mighty Max and Power Rangers figures.

These are trending news stories and fads that were prevalent at this time. These are topics that would have been in the media on October 28th, 1993.

Check out our personality summary for people who were born on October 28th, 1993.

If you are looking for some childhood nostalgia, then you should check out October 28th, 1999 instead.

Rugby player.
Born on October 28th, 1994
He was born exactly one year after this date.

Bill Clinton was the President of the United States on October 28th, 1993.

Enter your date of birth below to find out how old you were on October 28th, 1993.
This information is not transmitted to our server.

Here are some fun statistics about October 28th, 1993.