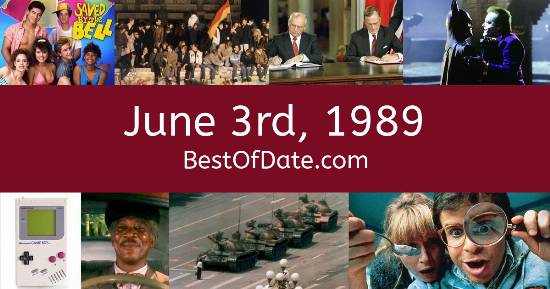 Songs that were on top of the music singles charts in the USA and the United Kingdom on June 3rd, 1989.

The movie "Indiana Jones and the Last Crusade" was at the top of the Box Office on June 3rd, 1989.

The date is June 3rd, 1989, and it's a Saturday. Anyone born today will have the star sign Gemini. Currently, people are enjoying their weekend.

It's summer, so the temperatures are warmer and the evenings are longer than usual. In America, the song Rock On by Michael Damian is on top of the singles charts. Over in the UK, Ferry Cross The Mersey by Various (Hillsborough Disaster Appeal) is the number one hit song.

On TV, people are watching popular shows such as "The Golden Girls", "21 Jump Street", "Star Trek: The Next Generation" and "Quantum Leap". Meanwhile, gamers are playing titles such as "Paperboy", "Super Mario Bros. 3", "RoboCop" and "Super Mario Land". Kids and teenagers are watching TV shows such as "Alvin and the Chipmunks", "Muppet Babies", "The Wonder Years" and "Denver, the Last Dinosaur".

If you're a kid or a teenager, then you're probably playing with toys such as the Nintendo Entertainment System, Laser Tag, Boglins (hand puppets) and Koosh Ball.

These are trending news stories and fads that were prevalent at this time. These are topics that would have been in the media on June 3rd, 1989.

News stories and other events that happened around June 3rd, 1989.

Check out our personality summary for people who were born on June 3rd, 1989.

If you are looking for some childhood nostalgia, then you should check out June 3rd, 1995 instead.

German soccer player.
Born on June 3rd, 1992
He was born exactly 3 years after this date.

George W. Bush Snr. was the President of the United States on June 3rd, 1989.

Margaret Thatcher was the Prime Minister of the United Kingdom on June 3rd, 1989.

Find out what your age was on June 3rd, 1989, by entering your DOB below.
This information is not saved on our server.

Here are some fun statistics about June 3rd, 1989.