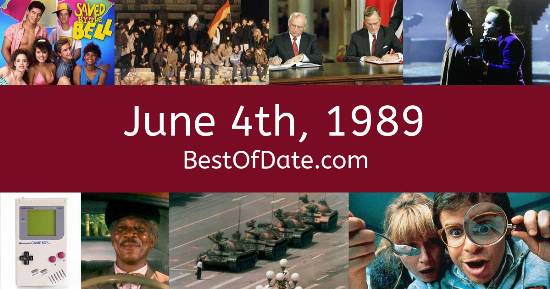 Songs that were on top of the music singles charts in the USA and the United Kingdom on June 4th, 1989.

The movie "Indiana Jones and the Last Crusade" was at the top of the box office on June 4th, 1989.

The date is June 4th, 1989 and it's a Sunday. Anyone born today will have the star sign Gemini. Currently, people are enjoying their weekend.

It's summer, so the temperatures are warmer and the evenings are longer than usual. In America, the song Rock On by Michael Damian is on top of the singles charts. Over in the UK, Ferry Cross The Mersey by Various (Hillsborough Disaster Appeal) is the number one hit song.

It's 1989, so the airwaves are being dominated by music artists such as Madonna, The Bangles, Phil Collins, Roxette, Milli Vanilli and The B-52s. In China, the Tiananmen Square protests are occurring. If you were to travel back to this day, notable figures such as Mel Blanc, Rebecca Schaeffer, Bette Davis and Sammy Davis, Jr would all be still alive.

On TV, people are watching popular shows such as "Columbo", "MacGyver", "Matlock" and "The Wonder Years". Meanwhile, gamers are playing titles such as "Tetris", "Ultima IV: Quest of the Avatar", "Altered Beast" and "Super Mario Bros. 3". Children and teenagers are currently watching television shows such as "Mister Rogers' Neighborhood", "Thomas the Tank Engine", "Growing Pains" and "21 Jump Street".

If you're a kid or a teenager, then you're probably playing with toys such as Screwball Scramble, Turnin' Turbo Dashboard, Koosh Ball and the Ghostbusters Proton Pack.

If you are looking for some childhood nostalgia, then check out June 4th, 1995 instead.

George W. Bush Snr. was the President of the United States on June 4th, 1989.

Margaret Thatcher was the Prime Minister of the United Kingdom on June 4th, 1989.

Enter your date of birth below to find out how old you were on June 4th, 1989.

Here are some fun statistics about June 4th, 1989.