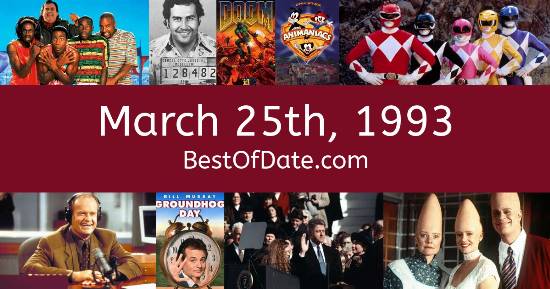 On March 25th, 1993, the following songs were at the top of the music charts in the USA and the UK.

The top "Box Office" movie on this date was the film "CB4".

The date is March 25th, 1993, and it's a Thursday. Anyone born today will have the star sign Aries. Spring has arrived and the days have become longer.

In America, the song Informer by Snow is on top of the singles charts. Over in the UK, Oh Carolina by Shaggy is the number one hit song. Bill Clinton is currently the President of the United States, and the movie CB4 is at the top of the Box Office.

If you were to travel back to this day, notable figures such as Brandon Lee, Conway Twitty, Dražen Petrović and Pat Nixon would all be still alive. On TV, people are watching popular shows such as "Last of the Summer Wine", "Matlock", "Home Improvement" and "Melrose Place". Meanwhile, gamers are playing titles such as "Duck Hunt", "Teenage Mutant Ninja Turtles III: The Manhattan Project", "Final Fantasy V" and "Tecmo NBA Basketball".

Kids and teenagers are watching TV shows such as "Mr. Bean", "Round the Twist", "Beverly Hills, 90210" and "Doug". If you're a kid or a teenager, then you're probably playing with toys such as the Game Boy, the SEGA Game Gear, the Super Nintendo Entertainment System (SNES) and the Talkboy.

These are trending news stories and fads that were prevalent at this time. These are topics that would have been in the media on March 25th, 1993.

News stories and other events that happened around March 25th, 1993.

Check out our personality summary for people who were born on March 25th, 1993.

If you are looking for some childhood nostalgia, then you should check out March 25th, 1999 instead.

Soccer player.
Born on March 25th, 2000
He was born exactly 7 years after this date.

Bill Clinton was the President of the United States on March 25th, 1993.

John Major was the Prime Minister of the United Kingdom on March 25th, 1993.

Find out what your age was on March 25th, 1993, by entering your DOB below.
This information is not saved on our server.