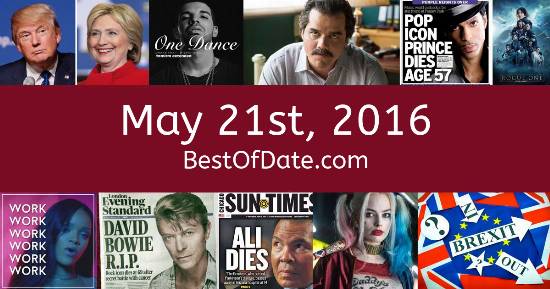 Songs that were on top of the music singles charts in the USA and the United Kingdom on May 21st, 2016.

The date is May 21st, 2016 and it's a Saturday. Anyone born today will have the star sign Gemini. Currently, people are enjoying their weekend.

The summer of 2016 has finally arrived. The weather has warmed up and the evenings are brighter than usual. The song One Dance by Drake is on top of the singles charts in both the USA and the United Kingdom. Barack Obama is currently the President of the United States and the movie Captain America: Civil War is at the top of the Box Office.

In the United Kingdom, David Cameron is the current Prime Minister. It's 2016, so the music charts are being dominated by artists such as Drake, Lukas Graham, Sia, Mike Posner, The Chainsmokers and Calvin Harris. Manchester United have just won the FA Cup after defeating Crystal Palace 2-1 in extra time.

On TV, people are watching popular shows such as "Modern Family", "Suits", "Peaky Blinders" and "Power". Meanwhile, gamers are playing titles such as "Batman: Arkham Knight", "Call of Duty: Black Ops III", "Tom Clancy's The Division" and "Uncharted 4: A Thief's End". Children and teenagers are currently watching television shows such as "Dora the Explorer", "Jake and the Never Land Pirates", "Nicky, Ricky, Dicky & Dawn" and "Bunnicula".

Notable events that occurred around May 21st, 2016.

Barack Obama was the President of the United States on May 21st, 2016.

David Cameron was the Prime Minister of the United Kingdom on May 21st, 2016.