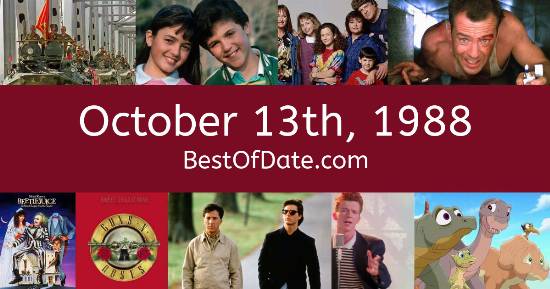 Songs that were on top of the music singles charts in the USA and the United Kingdom on October 13th, 1988.

The date is October 13th, 1988 and it's a Thursday. Anyone born today will have the star sign Libra. The summer is long gone. Temperatures have started to become much cooler and the evenings are beginning to get darker.

Fallen leaves have carpeted driveways, lawns, pathways and sidewalks and there's a fresh earthy scent in the ear. In America, the song Love Bites by Def Leppard is on top of the singles charts. Over in the UK, Desire by U2 is the number one hit song.

It's 1988, so the airwaves are being dominated by music artists such as Phil Collins, Bobby McFerrin, the Pet Shop Boys, Belinda Carlisle and Rick Astley. If you were to travel back to this day, notable figures such as Roy Orbison, Sugar Ray Robinson, Ruhollah Khomeini and Mel Blanc would all be still alive. On TV, people are watching popular shows such as "Family Ties", "Kate & Allie", "Who's the Boss?" and "Full House".

Meanwhile, gamers are playing titles such as "Missile Command", "Top Gun", "Platoon" and "Maniac Mansion ". Children and teenagers are currently watching television shows such as "Thomas the Tank Engine", "Adventures of the Gummi Bears", "Fireman Sam" and "Garfield and Friends". Popular toys at the moment include the likes of Fisher-Price Little People (Farm), Transformers, Mr Frosty and Hot Looks (fashion model dolls).

If you are looking for some childhood nostalgia, then check out October 13th, 1994 instead.

US politician.
Born on October 13th, 1989
She was born exactly one year after this date.

Ronald Reagan was the President of the United States on October 13th, 1988.

Margaret Thatcher was the Prime Minister of the United Kingdom on October 13th, 1988.

Enter your date of birth below to find out how old you were on October 13th, 1988.

Here are some fun statistics about October 13th, 1988.