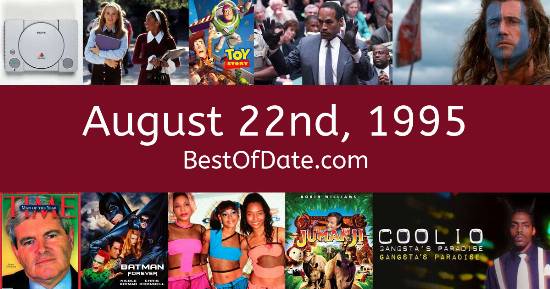 Songs that were on top of the music singles charts in the USA and the United Kingdom on August 22nd, 1995.

The date is August 22nd, 1995 and it's a Tuesday. Anyone born today will have the star sign Leo. The summer of 1995 is coming to an end and fall is just around the corner.

In America, the song Kiss From A Rose by Seal is on top of the singles charts. Over in the UK, Country House by Blur is the number one hit song. Bill Clinton is currently the President of the United States and the movie Dangerous Minds is at the top of the Box Office.

It's 1995, so radio stations are being dominated by the likes of Celine Dion, Everything but the Girl, Coolio, Oasis, Michael Jackson, Boyzone, Madonna, Montell Jordan, TLC and Mariah Carey. Former football player O.J. Simpson is currently being tried for the murder of his ex wife and her friend. If you were to travel back to this day, notable figures such as Yitzhak Rabin, Stretch, Roxie Roker and Dean Martin would all be still alive.

On TV, people are watching popular shows such as "Seinfeld", "One Foot in the Grave", "Martin" and "The Nanny". Meanwhile, gamers are playing titles such as "RoboCop Versus The Terminator", "Warcraft: Orcs & Humans", "Command & Conquer" and "The Adventures of Batman & Robin". Kids and teenagers are watching TV shows such as "Rosie and Jim", "The Fresh Prince of Bel-Air", "Gargoyles" and "Aaahh!!! Real Monsters".

If you're a kid or a teenager, then you're probably playing with toys such as Super Soaker (water gun), Mighty Max, Fisher-Price Great Adventures Castle and Sky Dancers.

If you are looking for some childhood nostalgia, then check out August 22nd, 2001 instead.

Bill Clinton was the President of the United States on August 22nd, 1995.

John Major was the Prime Minister of the United Kingdom on August 22nd, 1995.

Enter your date of birth below to find out how old you were on August 22nd, 1995.