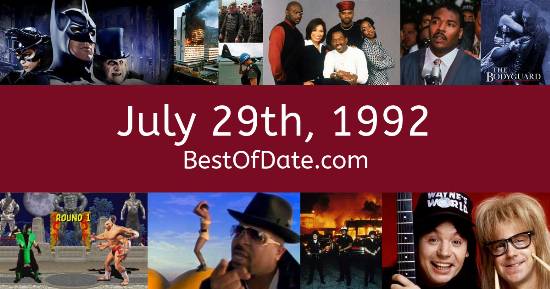 Songs that were on top of the music singles charts in the USA and the United Kingdom on July 29th, 1992.

As excited as we were about attending a taping of a TV show that day, there was sadness in the air, knowing that this was the last taping of it we would ever see. We arrived at the studio right on time and found Linda almost immediately. We waited in line for quite some time, and we saw the late Bob Saget, who came out of the Full House building next door and waved to all of us.
Posted on January 10th, 2022 14:57

The date is July 29th, 1992 and it's a Wednesday. Anyone born today will have the star sign Leo. It's summer, so the temperatures are warmer and the evenings are longer than usual.

In America, the song Baby Got Back by Sir Mix-A-Lot is on top of the singles charts. Over in the UK, Ain't No Doubt by Jimmy Nail is the number one hit song. George W. Bush Snr. is currently the President of the United States and the movie Mo' Money is at the top of the Box Office.

Fearing extradition to the United States, Colombian drug lord Pablo Escobar has recently escaped from his luxury self-designed prison near Medellín. The 1992 Summer Olympics are currently being held in Barcelona, Spain. In music news, Ice-T's heavy metal band "Body Count" have decided to pull the controversial song "Cop Killer" from their debut album. The song, which contains lyrics about shooting police officers, has been heavily criticized by political figures such as President George H. W. Bush and Vice President Dan Quayle.

If you were to travel back to this day, notable figures such as Anthony Perkins, Audrey Hepburn, Thurgood Marshall and Andre the Giant would all be still alive. On TV, people are watching popular shows such as "Last of the Summer Wine", "Cheers", "Matlock" and "One Foot in the Grave". Meanwhile, gamers are playing titles such as "Super Castlevania IV", "Civilization", "Desert Strike " and "Street Fighter II: The World Warrior".

Children and teenagers are currently watching television shows such as "The Care Bears", "Fireman Sam", "Garfield and Friends" and "Noozles". Popular toys at the moment include the likes of My Little Pony (figures), Mr Frosty, the Ghostbusters Proton Pack and the Game Boy.

If you are looking for some childhood nostalgia, then check out July 29th, 1998 instead.

John Major was the Prime Minister of the United Kingdom on July 29th, 1992.