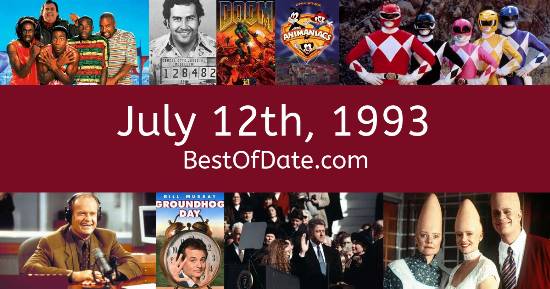 Songs that were on top of the music singles charts in the USA and the United Kingdom on July 12th, 1993.

The date is July 12th, 1993 and it's a Monday. Anyone born today will have the star sign Cancer. It's summer, so the temperatures are warmer and the evenings are longer than usual.

In America, the song Weak by SWV is on top of the singles charts. Over in the UK, Dreams by Gabrielle is the number one hit song. Bill Clinton is currently the President of the United States and the movie Jurassic Park is at the top of the Box Office.

A playing discs game called "Pogs" is currently spreading in popularity throughout the world. It's 1993, so radio stations are being dominated by the likes of Meat Loaf, UB40, Snow, Haddaway, Whitney Houston, Take That, Janet Jackson and Mariah Carey. If you were to travel back to this day, notable figures such as Reggie Lewis, Vincent Price, River Phoenix and Frank Zappa would all be still alive.

On TV, people are watching popular shows such as "Star Trek: The Next Generation", "In the Heat of the Night", "Dinosaurs" and "Step by Step". Meanwhile, gamers are playing titles such as "Duck Hunt", "Paperboy", "Final Fantasy V" and "Star Fox". Kids and teenagers are watching TV shows such as "Are You Afraid of the Dark?", "Home Improvement", "Barney & Friends" and "Goof Troop".

Popular toys at the moment include the likes of the Easy-Bake Oven, the Ghostbusters Proton Pack, the Game Boy and Littlest Pet Shop.

If you are looking for some childhood nostalgia, then check out July 12th, 1999 instead.

Bill Clinton was the President of the United States on July 12th, 1993.

John Major was the Prime Minister of the United Kingdom on July 12th, 1993.