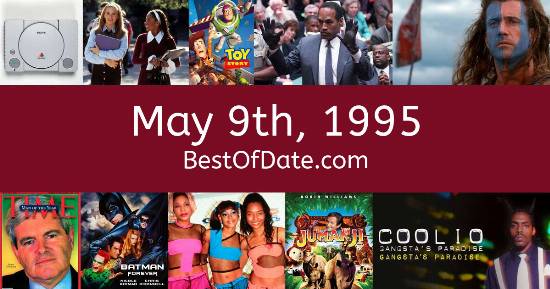 Songs that were on top of the music singles charts in the USA and the United Kingdom on May 9th, 1995.

The date is May 9th, 1995 and it's a Tuesday. Anyone born today will have the star sign Taurus. The summer of 1995 has finally arrived. The weather has warmed up and the evenings are brighter than usual.

In America, the song This Is How We Do It by Montell Jordan is on top of the singles charts. Over in the UK, Dreamer by Livin' Joy is the number one hit song. Bill Clinton is currently the President of the United States and the movie French Kiss is at the top of the Box Office.

On TV, people are watching popular shows such as "Married... with Children", "Mad About You", "X-Men" and "Boy Meets World". Meanwhile, gamers are playing titles such as "Earthworm Jim", "Donkey Kong Country", "Mortal Kombat 3" and "Full Throttle". Children and teenagers are currently watching television shows such as "Blossom", "Biker Mice from Mars", "Weird Science" and "Friends".

If you're a kid or a teenager, then you're probably playing with toys such as Sylvanian Families, Yo-yo, Pogs and Sky Dancers.

Notable events that occurred around May 9th, 1995.

If you are looking for some childhood nostalgia, then check out May 9th, 2001 instead.

Historical weather information for May 9th, 1995.

Bill Clinton was the President of the United States on May 9th, 1995.

John Major was the Prime Minister of the United Kingdom on May 9th, 1995.

Enter your date of birth below to find out how old you were on May 9th, 1995.