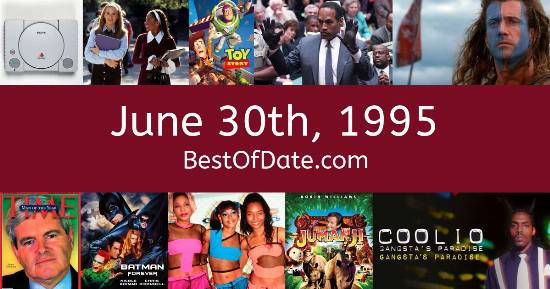 Songs that were on top of the music singles charts in the USA and the United Kingdom on June 30th, 1995.

The date is June 30th, 1995 and it's a Friday. Anyone born today will have the star sign Cancer. Currently, people have "that Friday feeling" and are looking forward to the weekend.

Actor Hugh Grant is in the news after he was recently arrested for soliciting a sex worker in Los Angeles. On TV, people are watching popular shows such as "Married... with Children", "Beverly Hills, 90210", "Rugrats" and "Star Trek: Deep Space Nine". Meanwhile, gamers are playing titles such as "Earthworm Jim", "Mortal Kombat 3", "Full Throttle" and "Air Combat".

Children and teenagers are currently watching television shows such as "Living Single", "Animaniacs", "Rocko's Modern Life" and "Gargoyles". Popular toys at the moment include the likes of Sylvanian Families, Pogs, Mighty Max and Action Man.

Bill Clinton was the President of the United States on June 30th, 1995.

John Major was the Prime Minister of the United Kingdom on June 30th, 1995.

Leave a comment and tell everyone why June 30th, 1995 is important to you.