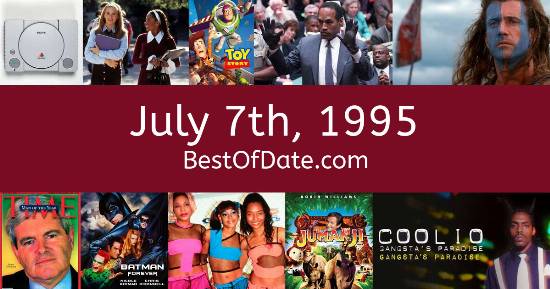 Songs that were on top of the music singles charts in the USA and the United Kingdom on July 7th, 1995.

The date is July 7th, 1995 and it's a Friday. Anyone born today will have the star sign Cancer. Currently, people have "that Friday feeling" and are looking forward to the weekend.

It's summer, so the temperatures are warmer and the evenings are longer than usual. In America, the song Waterfalls by TLC is on top of the singles charts. Over in the UK, Boom Boom Boom by Outhere Brothers is the number one hit song.

Actor Hugh Grant is in the news after he was recently arrested for soliciting a sex worker in Los Angeles. On TV, people are watching popular shows such as "Hangin' with Mr. Cooper", "Star Trek: Deep Space Nine", "Ellen" and "The Secret World of Alex Mack". Meanwhile, gamers are playing titles such as "Earthworm Jim", "Donkey Kong Country", "Warcraft: Orcs & Humans" and "Full Throttle".

Kids and teenagers are watching TV shows such as "The Animals of Farthing Wood", "Living Single", "Aaahh!!! Real Monsters" and "Dexter's Laboratory". If you're a kid or a teenager, then you're probably playing with toys such as Polly Pocket, Super Soaker (water gun), Pogs and Littlest Pet Shop.

Celebrities, historical figures and notable people who were born on the 7th of July.

Bill Clinton was the President of the United States on July 7th, 1995.

John Major was the Prime Minister of the United Kingdom on July 7th, 1995.

Enter your date of birth below to find out how old you were on July 7th, 1995.

Here are some fun statistics about July 7th, 1995.

Leave a comment and tell everyone why July 7th, 1995 is important to you.