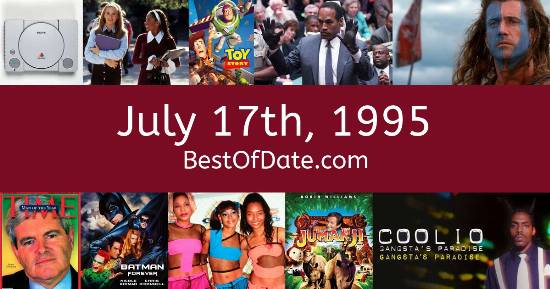 Songs that were on top of the music singles charts in the USA and the United Kingdom on July 17th, 1995.

The date is July 17th, 1995 and it's a Monday. Anyone born today will have the star sign Cancer. It's summer, so the temperatures are warmer and the evenings are longer than usual.

In America, the song Waterfalls by TLC is on top of the singles charts. Over in the UK, Boom Boom Boom by Outhere Brothers is the number one hit song. Bill Clinton is currently the President of the United States and the movie Pocahontas is at the top of the Box Office.

Singer Robbie Williams has just shocked the world by announcing that he is leaving the group Take That. On TV, people are watching popular shows such as "Matlock", "Hangin' with Mr. Cooper", "X-Men" and "Frasier". Meanwhile, gamers are playing titles such as "Donkey Kong Country", "Warcraft: Orcs & Humans", "Mortal Kombat 3" and "Full Throttle".

Children and teenagers are currently watching television shows such as "Fireman Sam", "Rosie and Jim", "The Ren & Stimpy Show" and "Biker Mice from Mars". If you're a kid or a teenager, then you're probably playing with toys such as Yo-yo, Pogs, Littlest Pet Shop and Sky Dancers.

If you are looking for some childhood nostalgia, then check out July 17th, 2001 instead.

Celebrities, historical figures and notable people who were born on the 17th of July.

Bill Clinton was the President of the United States on July 17th, 1995.

John Major was the Prime Minister of the United Kingdom on July 17th, 1995.