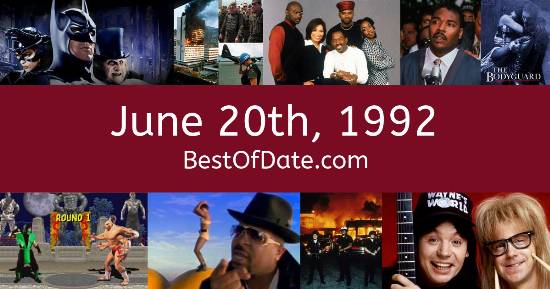 Songs that were on top of the music singles charts in the USA and the United Kingdom on June 20th, 1992.

The date is June 20th, 1992 and it's a Saturday. Anyone born today will have the star sign Gemini. Currently, people are enjoying their weekend.

It's summer, so the temperatures are warmer and the evenings are longer than usual. In America, the song I'll Be There by Mariah Carey is on top of the singles charts. Over in the UK, ABBA-esque by Erasure is the number one hit song.

George W. Bush Snr. is currently the President of the United States and the movie Patriot Games is at the top of the Box Office. In the United Kingdom, John Major is the current Prime Minister. Texting is not a thing yet. Instead, people are using landline phones and pagers. Furthermore, the vast majority of people still have no idea what "the Internet" is.

In basketball, the Chicago Bulls have just won the 1992 NBA Finals after defeating the Portland Trail Blazers 4-2. Meanwhile, Michael Jordan has been named as the "Finals Most Valuable Player" for the second year in a row. In the United States, former Secretary of Defense Caspar Weinberger has recently been indicted for his role in covering up the Iran-Contra affair. Tributes are currently pouring in for Australian singer Peter Allen, who has recently passed away from AIDS.

The film "Batman Returns", starring Michael Keaton, has just been released in movie theaters. If you were to travel back to this day, notable figures such as Anthony Perkins, Audrey Hepburn, Thurgood Marshall and Andre the Giant would all be still alive. On TV, people are watching popular shows such as "Married... with Children", "The Wonder Years", "Family Matters" and "Dinosaurs".

Meanwhile, gamers are playing titles such as "Duck Hunt", "F-Zero", "Super Castlevania IV" and "Civilization". Kids and teenagers are watching TV shows such as "Noozles", "Rugrats", "Taz-Mania" and "Darkwing Duck". Popular toys at the moment include the likes of Yo-yo, G.I. Joe (figures), the Super Nintendo Entertainment System (SNES) and Nerf Blaster.

Beverly Hills, 90210
A series that followed the lives of a group of teenagers living in Beverly Hills.

Saved by the Bell
Comedy series about a group of friends in high school.

If you are looking for some childhood nostalgia, then check out June 20th, 1998 instead.

John Major was the Prime Minister of the United Kingdom on June 20th, 1992.