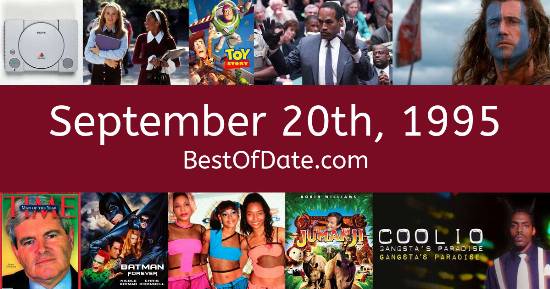 Songs that were on top of the music singles charts in the USA and the United Kingdom on September 20th, 1995.

The date is September 20th, 1995 and it's a Wednesday. Anyone born today will have the star sign Virgo. Schools have started back and autumn has arrived, so temperatures have started to cool and trees are beginning to shed their leaves.

The earthy smells of fall have started to fill the air. In America, the song Gangsta's Paradise by Coolio is on top of the singles charts. Over in the UK, Boombastic by Shaggy is the number one hit song.

Bill Clinton is currently the President of the United States and the movie To Wong Foo... is at the top of the Box Office. In the United Kingdom, John Major is the current Prime Minister. In fashion, "grunge" clothing has declined in popularity and women are beginning to wear form-fitting outfits such as slip dresses and pencil skirts. Movies such as Clueless and The Craft have popularized the "sexy school girl" look.

A new video game console called the PlayStation has just been released by Sony. On TV, people are watching popular shows such as "Murder, She Wrote", "Mad About You", "Boy Meets World" and "Party of Five". Meanwhile, gamers are playing titles such as "Warcraft: Orcs & Humans", "Mortal Kombat 3", "Full Throttle" and "Command & Conquer".

Kids and teenagers are watching TV shows such as "The Simpsons", "The Adventures of Pete & Pete", "X-Men: The Animated Series" and "All That". Popular toys at the moment include the likes of the Easy-Bake Oven, Polly Pocket, Yo-yo and Sky Dancers.

A Spotify playlist of songs from the year 1995. Take a trip back to the days of the Take That, Coolio, Oasis, TLC, Offspring and N-Trance.

Celebrities, historical figures and notable people who were born on the 20th of September.

Bill Clinton was the President of the United States on September 20th, 1995.

John Major was the Prime Minister of the United Kingdom on September 20th, 1995.

Enter your date of birth below to find out how old you were on September 20th, 1995.

Here are some fun statistics about September 20th, 1995.

Leave a comment and tell everyone why September 20th, 1995 is important to you.