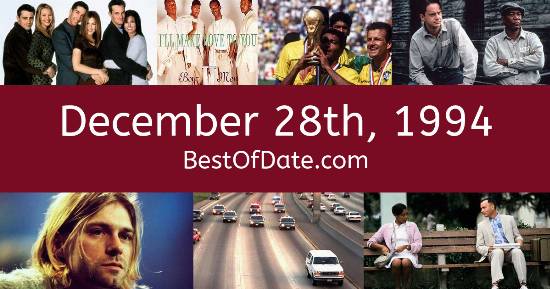 On December 28th, 1994, the following songs were at the top of the music charts in the USA and the UK.

The top "Box Office" movie on this date was the film "Disclosure".

The date is December 28th, 1994, and it's a Wednesday. Anyone born today will have the star sign Capricorn. Christmas Day of 1994 has just passed and many people are relaxing at home and enjoying the holiday season.

In America, the song Here Comes The Hotstepper by Ini Kamoze is on top of the singles charts. Over in the UK, Stay Another Day by East 17 is the number one hit song. Bill Clinton is currently the President of the United States, and the movie Disclosure is at the top of the Box Office.

In Europe, a war is continuing to rage on in Bosnia and Herzegovina. A war has recently broken out in Chechnya. Russian forces have now invaded the country in order to quash a rebellion by the Chechen Republic of Ichkeria. A new comedy film called Dumb & Dumber, starring Jim Carrey and Jeff Daniels, has recently hit the big screen.

Disney's "The Jungle Book" has been released in movie theaters. If you were to travel back to this day, notable figures such as Eazy E, Selena, Bob Ross and Jerry Garcia would all be still alive. On TV, people are watching popular shows such as "Murder, She Wrote", "Roseanne", "One Foot in the Grave" and "Ellen".

Meanwhile, gamers are playing titles such as "Gunstar Heroes", "Doom", "Sonic the Hedgehog 3" and "Donkey Kong Country". Children and teenagers are currently watching television shows such as "Rosie and Jim", "Are You Afraid of the Dark?", "Boy Meets World" and "Aaahh!!! Real Monsters". If you're a kid or a teenager, then you're probably playing with toys such as the Easy-Bake Oven, Polly Pocket, Nerf Blaster and the Talkboy.

These are trending news stories and fads that were prevalent at this time. These are topics that would have been in the media on December 28th, 1994.

Check out our personality summary for people who were born on December 28th, 1994.

If you are looking for some childhood nostalgia, then you should check out December 28th, 2000 instead.

Bill Clinton was the President of the United States on December 28th, 1994.

John Major was the Prime Minister of the United Kingdom on December 28th, 1994.

Enter your date of birth below to find out how old you were on December 28th, 1994.
This information is not transmitted to our server.

Here are some fun statistics about December 28th, 1994.