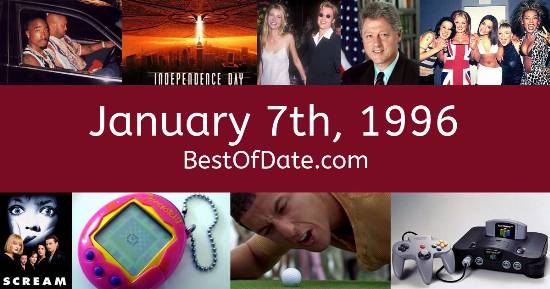 Songs that were on top of the music singles charts in the USA and the United Kingdom on January 7th, 1996.

The date is January 7th, 1996 and it's a Sunday. Anyone born today will have the star sign Capricorn. Currently, people are enjoying their weekend.

People are starting to return back to work and school after the Christmas holidays. In America, the song One Sweet Day by Mariah Carey & Boyz II Men is on top of the singles charts. Over in the UK, Earth Song by Michael Jackson is the number one hit song.

Bill Clinton is currently the President of the United States and the movie Toy Story is at the top of the Box Office. In the United Kingdom, John Major is the current Prime Minister. In fashion, "grunge" clothing has declined in popularity and women are beginning to wear form-fitting outfits such as slip dresses and pencil skirts. Movies such as Clueless and The Craft have popularized the "sexy school girl" look.

Meanwhile, in technology news, CDs have become the dominant format for music. People are buying CD players and the portable CD players such as the "Discman". As a result, the older cassette tape format is continuing to decline in sales. It's 1996, so radio stations are being dominated by the likes of Mariah Carey, Boyz II Men, Céline Dion, Oasis, Mark Morrison, Spice Girls, Los Del Rio, 2Pac and Coolio. On TV, people are watching popular shows such as "Martin", "Babylon 5", "Party of Five" and "ER".

Meanwhile, gamers are playing titles such as "Full Throttle", "Air Combat", "Tekken 2" and "Twisted Metal". Kids and teenagers are watching TV shows such as "The Simpsons", "Are You Afraid of the Dark?", "The Magic School Bus" and "Dexter's Laboratory". If you're a kid or a teenager, then you're probably playing with toys such as Polly Pocket, G.I. Joe (figures), Mighty Max and Action Man.

If you are looking for some childhood nostalgia, then check out January 7th, 2002 instead.

Bill Clinton was the President of the United States on January 7th, 1996.

John Major was the Prime Minister of the United Kingdom on January 7th, 1996.

Enter your date of birth below to find out how old you were on January 7th, 1996.

Here are some fun statistics about January 7th, 1996.