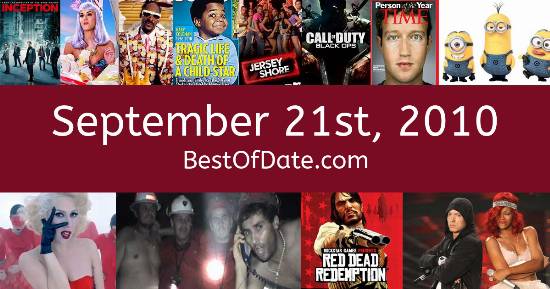 These songs were on top of the music charts in the United States and the United Kingdom on September 21st, 2010.

The top "Box Office" movie on this date was the film "The Town".

The following comments about September 21st, 2010 were written by our visitors.

I wasted many hours playing Civilization V. That game was so addictive. I also played the previous release.
Posted on September 21st, 2022 09:17

The date is September 21st, 2010, and it's a Tuesday. Anyone born today will have the star sign Virgo. Schools and colleges are starting again and Autumn has officially arrived. As a result, temperatures are beginning to cool and trees are starting to shed their leaves.

The earthy smells of fall have started to fill the air. In America, the song Teenage Dream by Katy Perry is on top of the singles charts. Over in the UK, Start Without You by Alexandra Burke is the number one hit song.

Barack Obama is currently the President of the United States, and the movie The Town is at the top of the Box Office. In the United Kingdom, David Cameron is the current Prime Minister. The term "hipster" is currently growing in use. The word is being used to describe people who are pretentious and deliberately anti-mainstream.

Video rental stores such as Blockbuster are continuing to close their doors at the moment. This is due to the increasing popularity of online streaming services such as Netflix and Hulu. It's 2010, so the music charts are being dominated by artists such as Kesha, Katy Perry, Rihanna, Eminem and Bruno Mars. Rescuers in Chile are currently working to release 33 men who have become trapped following a cave-in at a gold and copper mine near the city of Copiapó. The ongoing effort to rescue the miners is receiving widespread media attention.

In Ireland, Taoiseach Brian Cowen is being accused of being drunk or hungover during his recent interview on RTE's "Morning Ireland". If you were to travel back to this day, notable figures such as Denise Borino-Quinn, Pete Postlethwaite, Nate Dogg and Elizabeth Taylor would all be still alive. On TV, people are watching popular shows such as "Futurama", "CSI: NY", "Skins" and "Real Housewives of New York City".

Meanwhile, gamers are playing titles such as "Pokémon Platinum", "Halo 3: ODST", "Call of Duty: Modern Warfare 2" and "God of War III". Kids and teenagers are watching TV shows such as "Dora the Explorer", "One Tree Hill", "Johnny Test" and "Glee". Popular toys at the moment include the likes of the Xbox 360, Iggle Piggle, ZhuZhu Pets and the iPad.

These are trending news stories and fads that were prevalent at this time. These are topics that would have been in the media on September 21st, 2010.

News stories and other events that happened around September 21st, 2010.

Check out our personality summary for people who were born on September 21st, 2010.

If you are looking for some childhood nostalgia, then you should check out September 21st, 2016 instead.

Barack Obama was the President of the United States on September 21st, 2010.

David Cameron was the Prime Minister of the United Kingdom on September 21st, 2010.

Find out what your age was on September 21st, 2010, by entering your DOB below.
This information is not saved on our server.

Here are some fun statistics about September 21st, 2010.