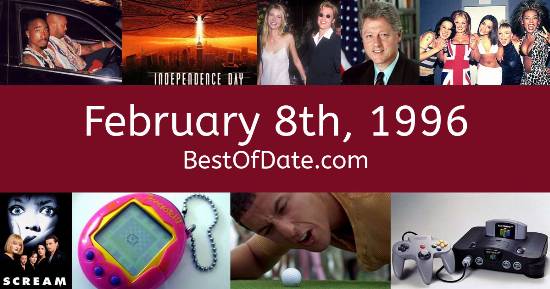 Songs that were on top of the music singles charts in the USA and the United Kingdom on February 8th, 1996.

The date is February 8th, 1996 and it's a Thursday. Anyone born today will have the star sign Aquarius. Valentine's Day is just around the corner.

In America, the song One Sweet Day by Mariah Carey & Boyz II Men is on top of the singles charts. Over in the UK, Spaceman by Babylon Zoo is the number one hit song. Bill Clinton is currently the President of the United States and the movie Black Sheep is at the top of the Box Office.

On TV, people are watching popular shows such as "Hangin' with Mr. Cooper", "The X-Files", "Party of Five" and "Star Trek: Voyager". Meanwhile, gamers are playing titles such as "Air Combat", "Command & Conquer", "Rayman" and "Duke Nukem 3D". Kids and teenagers are watching TV shows such as "Married... with Children", "Teenage Mutant Ninja Turtles", "Rugrats" and "Brotherly Love".

Popular toys at the moment include the likes of Sylvanian Families, Jenga, Nerf Blaster and Littlest Pet Shop.

Bill Clinton was the President of the United States on February 8th, 1996.

John Major was the Prime Minister of the United Kingdom on February 8th, 1996.

Enter your date of birth below to find out how old you were on February 8th, 1996.

Here are some fun statistics about February 8th, 1996.

Leave a comment and tell everyone why February 8th, 1996 is important to you.