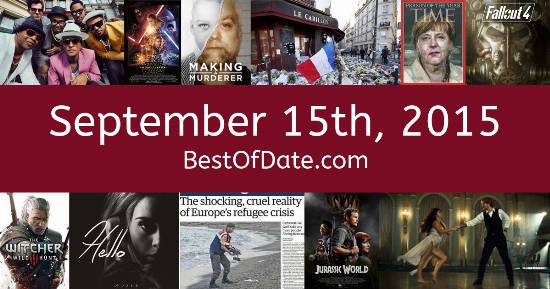 Songs that were on top of the music singles charts in the USA and the United Kingdom on September 15th, 2015.

The date is September 15th, 2015 and it's a Tuesday. Anyone born today will have the star sign Virgo. Schools have started back and autumn has arrived, so temperatures have started to cool and trees are beginning to shed their leaves.

The earthy smells of fall have started to fill the air. In America, the song Can't Feel My Face by The Weeknd is on top of the singles charts. Over in the UK, What Do You Mean? by Justin Bieber is the number one hit song.

Barack Obama is currently the President of the United States and the movie The Perfect Guy is at the top of the Box Office. In the United Kingdom, David Cameron is the current Prime Minister. A social networking website called Vine is extremely popular at the moment.

It's 2015, so the music charts are being dominated by the likes of OMI, Bruno Mars, Ellie Goulding, Adele, Justin Bieber and Hozier. Former NFL player Tyler Sash has been found dead at his home. In the UK, Jeremy Corbyn has become the new leader of the Labour Party.

In Australia, Malcolm Turnbull has become the new Prime Minister after defeating Tony Abbott in a leadership ballot. If you were to travel back to this day, notable figures such as Jonah Lomu, Lemmy, David Bowie and Angela Raiola would all be still alive. On TV, people are watching popular shows such as "Bones", "The Vampire Diaries", "House of Cards" and "Jane the Virgin".

Barack Obama was the President of the United States on September 15th, 2015.

David Cameron was the Prime Minister of the United Kingdom on September 15th, 2015.

Enter your date of birth below to find out how old you were on September 15th, 2015.

Here are some fun statistics about September 15th, 2015.